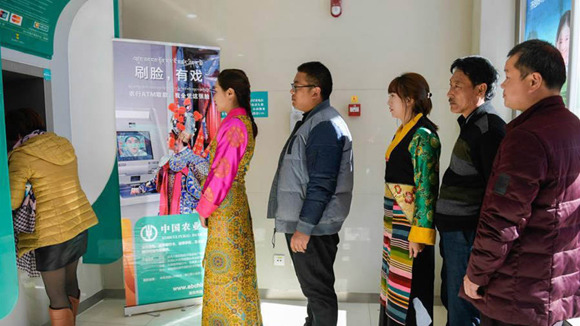 The People wait in line to withdraw cash from an ATM at a branch of the Agricultural Bank of China (ABC) in southwest China's Tibet Autonomous Region. (Photo provided to CGTN)

According to ABC's branch in Tibet, by the end of 2017, 20 ATMs with facial recognition technology had been installed, with 14 in the regional capital Lhasa and its vicinity, and the rest in other localities.

The machines can be used in the Tibetan language, making them more convenient for use among local herdsmen.

"It's fast and convenient," said Migmar Dondrup, a resident in Lhasa. "I don't have to bring my debit cards or bankbooks anymore."

Currently, 100 new ATMs are being tested. They will be in operation in February, according to the ABC.

ABC is not the first bank in China to introduce the facial recognition technology. In 2015, China Merchants Bank started using the technology in the southern metropolis of Shenzhen. In 2016, it expanded the service to about 1,000 ATMs in 106 cities.

In China, the rapid development of facial recognition technology has led to its use in a number of innovative ways. Beijing's Temple of Heaven has used it in toilets to deter toilet paper theft. In Jinan City, traffic police have installed facial scanners at intersections to catch and shame jaywalkers. Supermarkets in some big cities have been using the technology at bag deposit areas.