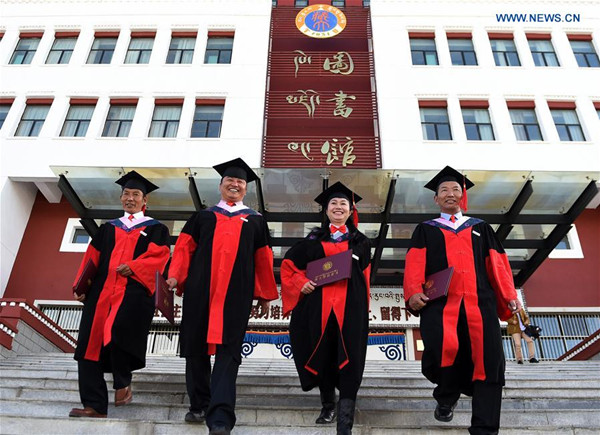 "As one of the first doctorate holders that were indigenously cultivated in Tibet, I appreciate very much the accomplishment of study under the government policy to protect and inherit ethnic culture," said Soinam Cering, 32, one of the graduates.

When he was young, he loved reading books left by his grandfather, who had received private tutoring and engaged in filing historic archives after the emancipation of Tibet.

Reading a lot of history books, Soinam Cering grew a strong interest in Tibetan history. After graduating from university, he worked in the Xigaze government before enrolling as a Mandarin-Tibetan translation major for a master's degree in Tibet University.

"I had never dreamed of becoming a doctor before 2014," he said, adding that the high cost of being away from home was a major reason he hesitated to apply for a doctor's degree in other cities.

Tibet University was authorized to award doctorates in 2013.

The next year, when Soinam Cering graduated for his master's degree, he was first place in the enrollment exam, becoming the first doctorate student of Cedain Zhaxi, head of the China Tibetology research institute of the university.

Over the past three years, Soinam Cering wrote more than 10 papers.

He was also awarded a scholarship for doctors three times in a row funded by the central and regional government.