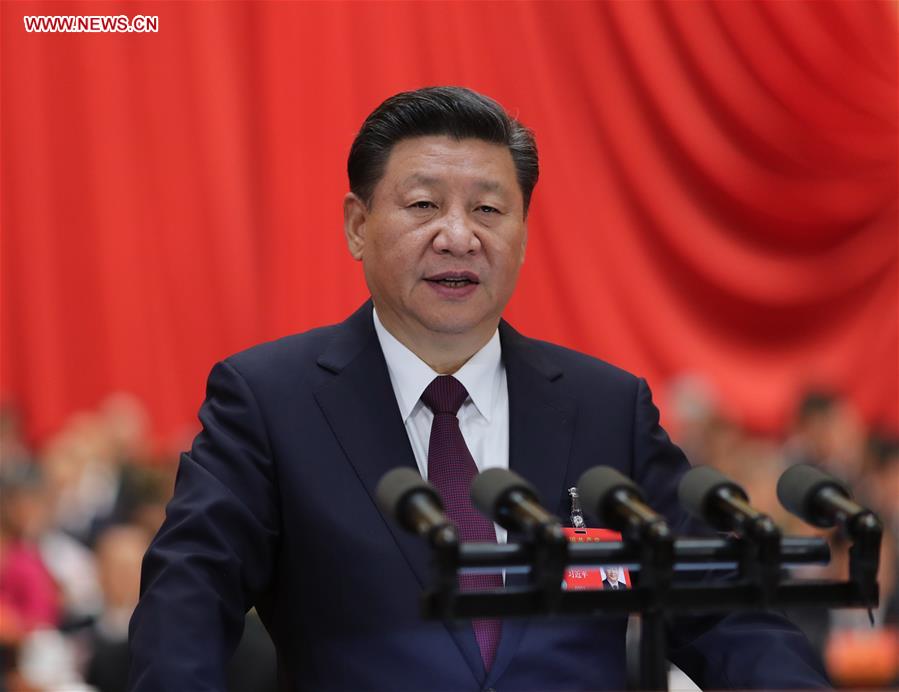 BEIJING, Oct. 18 (Xinhua) -- Xi Jinping delivered a report to the opening of the 19th National Congress of the Communist Party of China (CPC) on Wednesday. The following are the highlights of the report:

A NEW ERA WITH NEW THOUGHT

Socialism with Chinese characteristics has entered a new era.

The CPC has given shape to the Thought on Socialism with Chinese Characteristics for a New Era, a long-term guide to action that the Party must adhere to and develop.

The Thought builds on and further enriches Marxism-Leninism, Mao Zedong Thought, Deng Xiaoping Theory, the Theory of Three Represents, and the Scientific Outlook on Development. It represents the latest achievement in adapting Marxism to the Chinese context.

The CPC has drawn up a two-stage development plan for the period from 2020 to the middle of the 21st century to develop China into a "great modern socialist country."

In the first stage from 2020 to 2035, the CPC will build on the foundation created by the moderately prosperous society with a further 15 years of hard work to see that socialist modernization is basically realized.

In the second stage from 2035 to the middle of the 21st century, the CPC will, building on having basically achieved modernization, work hard for a further 15 years and develop China into a great modern socialist country that is prosperous, strong, democratic, culturally advanced, harmonious, and beautiful.

The principal contradiction facing Chinese society has evolved to be that between unbalanced and inadequate development and the people's ever-growing needs for a better life.

Now the needs to be met for the people to live a better life are increasingly broad. Not only have their material and cultural needs grown, their demands for democracy, rule of law, fairness and justice, security, and a better environment are increasing.

China's economy has been transitioning from a phase of rapid growth to a stage of high-quality development.

China will leverage the fundamental role of consumption in promoting economic growth and improve the framework of regulation underpinned by monetary policy and macro-prudential policy, and see that interest rates and exchange rates become more market-based.

China will not close its door to the world; it will only become more and more open.

China will implement the system of pre-establishment national treatment plus a negative list across the board.

China will significantly ease market access and protect the legitimate rights and interests of foreign investors.

The CPC will set up a central leading group for advancing law-based governance in all areas.

The CPC has incorporated Beautiful China into its two-stage development plan for building a great modern socialist country.

The modernization is one characterized by harmonious coexistence between man and nature.

By the year 2020, military mechanization will be basically achieved, with IT application coming a long way and strategic capabilities seeing a big improvement. The modernization of the national defense and armed forces should be basically completed by 2035.

The people's armed forces will be transformed into world-class military by the mid-21st century.

No matter what stage of development it reaches, China will never seek hegemony or engage in expansion.

Having gained overwhelming momentum in its fight against corruption, the Party is determined to secure a sweeping victory over the greatest threat to the Party.