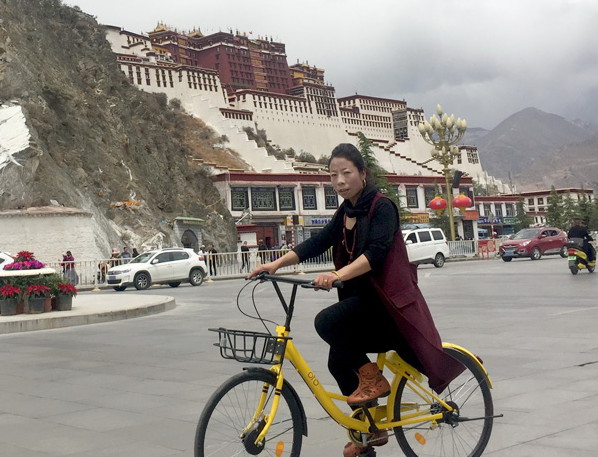 Jamyang Tso, a resident of Lhasa, rides an Ofo bike on Monday near the Potala Palace. [Photo by Palden Nyima/China Daily]

Bike-sharing has come to Lhasa, capital of the Tibet autonomous region, and one local owner of a small business called it a more efficient and pleasant way to travel between home and work.

China's biggest bicycle-sharing startup, Ofo, began operating in the capital on Sunday and announced plans to make 2,000 shared bikes available there this month and well as to expand the service across the region.

Jamyang Tso, 35, who has a shop selling yak dairy products near the city's historic Potala Palace, said there are drawbacks to taking buses or walking.

"It's not far from my home to the shop, though walking is not easy for me. I have been taking the bus every day, but I hate crowds and waiting. It is always very crowded and time consuming," she said.

She said she signed up with Ofo on Sunday, and likes it.

"With my friend's help, I learned to become a user of Ofo, and it only takes around 20 minutes from my home to the shop by bike. I found it's time efficient and cheap," she said. "It is convenient and cool, without a feeling of being crowded or impatient. There's fresh air along the way. I prefer Ofo to get to work."

Ofo first entered Tibet in April, when it brought its bikes to Xigaze, the region's second-biggest city. The company's officials said residents welcomed the new way to get around.

Zhang Yiding, one of Ofo's founders, said they hope to put 10,000 shared bikes in the next few months in Lhasa, which is the company's 100th city.

He said his department is willing to improve traffic policies to support Ofo's operation in Tibet, and he hoped Ofo would enhance the management of its operation to bring safe, convenient and comfortable travel to residents.

Ofo users are required to pay a 99 yuan ($14.35) deposit to open an account, but riding for 1 hour costs only 1 yuan. No other shared bike service has entered Tibet yet.

Since its launch in June 2015, Ofo has become the world's biggest shared bicycle service in terms of users and coverage, company officials said.

Its bikes have been used more than 1 billion times in 100 cities in four countries, they said.