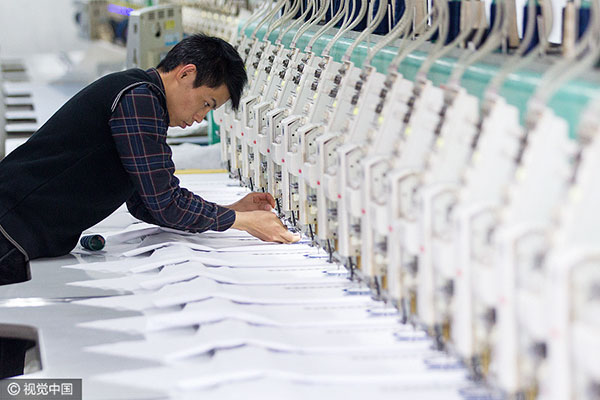 A man works at a small fabric factory at Kanglecun, one of the urban villages in Guangzhou on February 29, 2016 in Guangzhou, Guangdong province.[Photo/VCG]

Of the 31 provinces, municipalities and autonomous regions that have released their GDP for the first quarter, a total of 22 saw their GDP exceed the national average growth rate of 6.9 percent, Beijing Youth Daily reported.

Four regions witnessed their GDP top more than one trillion yuan ($145.14 billion) in the first quarter. East China's Zhejiang province, with a GDP of 1.06 trillion yuan, was the new comer to the one-trillion-yuan GDP club.

In sharp contrast, the northeastern steel-making province of Liaoning recorded the lowest growth of 2.4 percent. Last year, the province saw its economy shrink by 2.5 percent. The local government admitted in January that a raft of economic data had been falsified from 2011 to 2014 and vowed to eliminate the bubbles in statistics.

China's economy posted a forecast-beating growth rate in the first quarter of 2017, with GDP up 6.9 percent from a year ago, according to the National Bureau of Statistics.

The reading, the quickest increase in 18 months, was above the full-year target of 6.5 percent and the 6.8-percent increase registered in the fourth quarter of 2016.