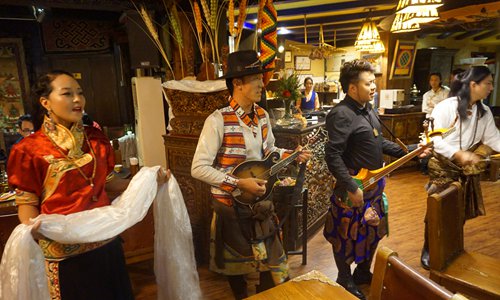 Hada is given to clients as a welcoming symbol in Makye Ame restaurant. (Photo/Courtesy of Hwang Hyerin)

No need to embark on a lengthy journey across snow-capped mountains to satisfy a craving for sliced yak tongue anymore. Foodies from near and far have been enjoying Tibetan food, culture and hospitality in the very center of China's capital.

"Not only is the food different and delicious, but everything feels so exotic here," said Li Zhang, a regular of Tibetan restaurant Makye Ame. "This place is just 30 minutes from my home, but it feels like I travelled 3,000 kilometers to Lhasa."

Established in 2001, Makye Ame is one of the oldest Tibetan restaurants in Beijing and one that honors the friendly traditions of the high plateau.

"Our staff is made of young Tibetan people who come from all three of China's Tibetan regions - Tibet, Qinghai and Sichuan provinces," said 24-year-old Mima Lhamo from Shigatse City, the Tibet Autonomous Region, who is staff manager of the restaurant. Dressed in a colorful national dress, she skillfully manages a team of young Tibetan cooks and waiters. "As for our clients, they come from everywhere, including Tibetan, Han people and foreigners."

Makye Ame is only one of the many Tibetan restaurants that have sprung up in recent years all over Beijing, catering to a small but growing customer base. In addition to taking guests on a unique culinary adventure, these restaurants have become platforms for highlighting Tibet's unique culture to residents of Beijing.

Founded in 2001 by Zelang Wangqing, a prolific entrepreneur from Aba Tibetan and Qiang Autonomous Prefecture, in western Sichuan, Makye Ame is renowned for providing a genuine culinary experience, even if it means unsettling customers who may not be used to Tibetan's love of meat and milk.

Lhamo, who was born and raised in Tibet, vouches for the authenticity. "The meat dishes are exactly what you can find in Tibet, same preparation and same taste," she said.

Reflecting Tibetan people's legendary carnivorous lifestyle, the menu is as meaty as it gets with dozens of yak and mutton dishes in all forms and sizes. Guests can quench their thirst with a cup of butter tea, Tibet's salty traditional drink, or with various kinds of highland barley liquors.

While fresh meat is sourced from the Inner Mongolia Autonomous Region, other ingredients, such as dairy products and dried yak meat, are flown in directly from Lhasa. "Most of the things we serve here are simply unavailable elsewhere in Beijing," Lhamo said.

The restaurant's insistence on providing authentic dishes, without trying to make them more palatable to local taste, is both commendable and risky. Some customers are visibly satisfied, others not as much. "Avoid the tasteless tsamba at all costs," reads one online review, referring to Tibetans' favorite staple food of roasted barley flour.

Qomolanga restaurant, another popular venue for Tibetan food in Beijing, has taken a different approach to authenticity.

Hidden deep in the heart of Beijing's hutong, not far from the tourist attraction Houhai, Qomolangma is located inside the Tibetan Autonomous Region's liaison office in Beijing. The restaurant mostly caters to tourists and families who are somewhat less tempted by daring culinary adventures.

Liu Hai, staff manager of the restaurant, explains that the restaurant had to adapt its taste to please local costumers, while offering typical Tibetan dishes like sheep head and fried ginger.

"We adapted most of our Tibetan food to Han people's taste by adding local spices, and since most of our cooks are Han people, about half of our menu consists of Sichuan food," she told Metropolitan.

Chinese clients looking for something different without overstepping their taste buds' boundaries have welcomed this localization. However, if this fusion of Sichuan dishes and Tibetan meat helped the restaurant gain new clients, others remain more skeptical.

"When Tibetan officials and leaders come to the capital and visit our restaurant, they usually just drink butter tea and then eat elsewhere," said Liu. "They say it's not real Tibetan food." 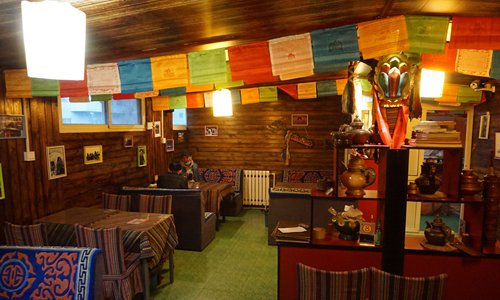 Tsangyang Gyatso has become a meeting spot for Tibetan students in Beijing. (Photo/Courtesy of Hwang Hyerin)

In addition to a traditional feast, a particular feature of many Tibetan restaurants in Beijing is their passion for offering an experience of Tibetan culture that goes beyond food.

For 24-year-old Gen Nang, Tibetan restaurant owners in Beijing have a responsibility to do more than just satisfy cravings. Nang is a native of Yushu Tibetan Autonomous Prefecture, in Qinghai, and he launched his restaurant Tsangyang Gyatso in Haidian district in 2015. He feels a responsibility as a representative of the Tibetan people to leave his clients with a lasting positive impression.

"We welcome Han people here and serve them our local specialty food, and our priority is to make sure they are satisfied and leave with a good image of Tibetans," he told Metropolitan. "The meat comes directly from Qinghai, because we want to offer only the best products to our customers."

In addition to food quality, Nang spared no efforts to recreate the cozy and warm feeling of his native Yushu in China's capital, delighting his customers with a visual feast. Refusing to settle for less than authenticity, he shipped prayer flags, yak skulls, carpets and various art objects directly from Qinghai.

Tsangyang Gyatso quickly became a favorite spot of both Tibetan and Han students from nearby universities looking to relax. Liu Tianqi, a regular customer from Henan Province, told Metropolitan, "It's quite amazing that we can have this kind of experience in Beijing. I study next door, and entering the restaurant is like stepping into another world."

Nang is a musician and likes to delight his guests with Tibetan folk songs. "When the restaurant is full, I like to play the guitar for my guests so they can both taste and listen to the 'Qingzang Gaoyuan,'" he said.

Although it was not part of his initial plan, Wangqing quickly realized the enormous potential food culture has to help explore and foster understanding between local Beijingers and Tibetan people.

"Makye Ame is a bearer of the Tibetan food culture, and our restaurant constantly seeks to showcase and promote Tibetan culture. Our goal is to make it possible for more tourists, both domestic and foreign, to experience and get a better understanding of Tibetan culture," he said.

Christopher St-Cavish, former cook and now food writer based in China, believes engaging in foreign culinary experiences can be an occasion for people to open their minds to other cultures.

"Cuisine can be a great diplomat," he said. "It sure seems easier to like a country and its people when you genuinely like their food."

Love of food has the power to overcome cultural boundaries, and enjoying an exotic dish at an ethnic-food restaurant can be the first step toward fostering respect for different cultures, which is a fundamental aspect of a multicultural society.

St-Cavish recalls growing up in a suburb of Miami where the most exotic thing available was Thai food.

"It was really rather poor Thai food, but the promise it held out for discovering a whole new world was quite powerful," he said.

This was his first step on a journey that would eventually bring him to Thailand and then on to China, proving that food can be a launch pad for discovering hidden opportunities.

This echoes the ideas of Krishnendu Ray, associate professor of food studies at New York University, in his book The Ethnic Restaurateur. Ray is a strong advocate of the idea that culinary experiences can build a bridge between cultures. "Eating another culture's food is probably the easiest thing you can do to engage with that culture," he said.

However, these exchanges are not spontaneous and require some effort on the part of the client. For real and meaningful cultural discoveries to take place, he suggests that customers should slow down, soak in the atmosphere and enjoy their experience.

"Foodie culture now is all about a competition to find the next best place, but that anxiety gets in the way of really engaging with cultural difference. Talk to the people who are serving you, the people behind the counter, the people who are cooking and see if you can have a conversation," Ray said.

These kinds of cultural exchanges are not just abstract ideas for Lhamo; it is part of her daily job at Makye Ame.

"Some people cannot go to Tibet, for lack of time or money, here they can appreciate Tibetan dishes and Tibetan culture without leaving Beijing," Lhamo said. "We try to let them go back home with a little bit of Tibet in their hearts."