Tsezha, 57 years old, lives in the northern Tibetan Plateau 4,747 meters above sea level. For the local people, herding animals is the main livelihood. Tsezha has worked with yaks and sheep for half his life. However, this kind of lifestyle existed for generations is quietly being changed by the Internet.

Promoted by the national strategies of “Internet Plus” and “mass entrepreneurship and innovation”, Tibet Autonomous Region has conformed to the trends of the times, actively promoted the development of e-commerce and achieved good results. 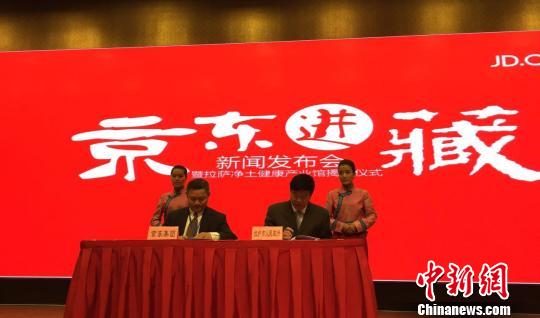 On August 14, 2015, the Lhasa municipal government signed a strategic cooperative agreement with JD.com, a Chinese e-commerce giant. The two sides agreed to engage in an in-depth e-commerce cooperation, with Jingdong becoming the first e-commerce business to enter Tibet. Well-known national e-commerce companies have entered into Tibet in succession, which stimulating the development vitality of the local e-commerce industry and they are playing bigger roles in promoting their brands, advancing people’s livelihoods, boosting industry upgrade etc.

Traditional commerce and trade enterprises have begun to attach importance to expanding e-commerce channels, seeking to transformation and upgrade, thus forming a state that on and offline business are mutual dependent and developing shoulder to shoulder. The number of online business has gradually expanded.

The rapid popularization of e-commerce has created a chain reaction, increasing the volume of express delivery services in Tibet, which has surprised Liu Jianhua, head of freight logistics for Yunda, a Chinese courier delivery service. “Two years ago, we could handle around 400 packages per day,” Liu said. “Today, the number exceeds 1,000 packages.” He said that because of the rapid growth, the Yunda headquarters had already moved around three times, with the expanding of their warehouse.

At present, three characteristics have emerged from the development of e-commerce business in Tibet: the momentum of development is good, but the distribution is fragmented; trade is increasingly active, but the scale is still small; ethnic characteristics are distinctive, but the market promotion is not enough, according to Benba, director of Department of Commerce of Tibet Autonomous Region.

Ethnic cultural tourism, folk handicrafts, Tibetan medicine, special agriculture and livestock industry products, plateau drinking water, and several other major ethnic characteristic industries are recognized throughout China and the world at large, while they are able to be market promotion by e-commerce in future.