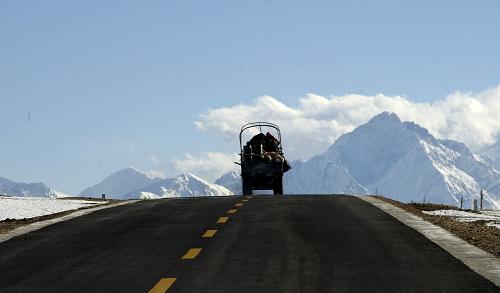 On July 1st, the 10th anniversary of the Qinghai-Tibet Railway, Losang Gyaltsen, Chairman of the Tibet Autonomous Region, said the railway is already contributing toward Tibet’s opening up. In the future, Tibet will build an important transport corridor to South Asia with the railway as part of its core construction.

According to Losang Gyaltsen, the railway has already operated safely for more than 3000 days. The Qinghai-Tibet Railway is a plateau highway connecting Tibet to  inland China. It is a road for Tibet’s opening up, a road for Tibet’s future development, and tourism route to experience Tibet’s magic and splendor.

“In the 10 years of the railway’s operation, it has made irreplaceable contributions toward Tibet’s accelerated economic social development, promoted the transformation and upgrade of its economy, built a new tourism model, increased the income of farmers and shepherds, and increased ethnic unity and strengthened our border security.”

Losang Gyaltsen said that government agencies have estimated that in the 10 years of the railway’s operation, it has saved a total of 12.57 billion yuan for consumers, including 10.6 billion yuan in freight transport and 1.97 billion yuan in passenger transport, improving the people’s sense of ownership and fulfillment.

The railway has helped the inheritance and development of the Tibetan culture, said Losang Gyaltsen. The railway has brought a large amount of new things, new information, and new concepts to Tibet, updating and opening up the ideas for all ethnic groups in Tibet, helping them more easily accept modern science and technology, and providing access to the enjoyment of modern cultural education.

Since the July 1st, 2006 launch of the Qinghai-Tibet Railway, railway construction in Tibet has enjoyed robust growth. Losang Gyaltsen sad that since the Lhasa-Shigatze Railway launched in August of 2014, as of now, the total operational distance for Tibetan railways has reached 954 km. The Lhasa-Nyingchi Railway began construction in June of 2015; the Kangding- Nyingchi portion of the Sichuan-Tibet Railway and the Shigatze-Gyirong portion of the China-Nepal Railway have also begun project planning and research.

He said the “13th Five-Year Plan” will be a golden period for railway construction in Tibet, which relies on the fantastic foundation and accumulated experience of the Qinghai-Tibet railway’s operation in the past 10 years.

He said that Tibet has devised goals for its railway development to basically achieve the vision and goals of the “two vertical, two horizontal, five out-of-district, and three out-of-country” trunk line railway network by 2030. Construction for a new batch of trunk lines within districts will help optimize the transportation network, as well as help the construction of projects such as the Nagqu-Chamdo Railway and the Lhasa-Maizhokunggar Railway, so that more residents could enjoy the fruits of railway construction.

In the meantime, Tibet will accelerate the construction of new lines of its inter-regional trunk lines and expanding its existing lines. The construction will focus on the Sichuan-Tibet, Yunnan-Tibet, Yushu-Chamdo, and Xinjiang-Tibet Railways, the energy expansion and electrification renovation of the Golmud-Lhasa portion of the Qinghai-Tibet Railway, and elevate the communication and exchange capacity between Tibet and neighboring provinces.

There are four international ports and one bilateral port in Tibet, providing robust trading with South Asian countries. Tibet is a nationally-recognized, important region for border opening up and development in China, and a vital avenue for opening-up toward South Asia.

The national strategy of “One Belt, One Road” in Tibet will use the railway as its core, build a vital transport avenue of opening up toward South Asia, promote the construction of its port railways and related facilities, construct a port railway to reach Gyirong, Yadong, and Burang, and elevate Tibet’s level of opening up, said Losang Gyaltsen.