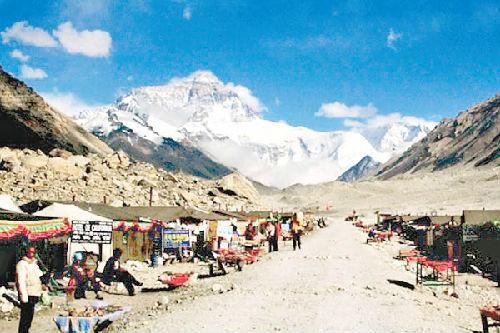 File photo: The Mt. Qomolangma base camp is a must-see for tourists visiting Tibet.

According to a June 6th report in the Spanish newspaper El País, many hikers were hurt by frostbite hiking the southern slope of Mt. Qomolangma. On May 19th alone, there were almost 200 hikers who tried to reach the peak on the southern side. Some hikers gave up and turned back, and other hikers hiked for almost 20 hours, persevering through severe weather, strong wind, and extreme cold. “Many frostbitten hikers requested helicopter rescue from the Number Two Base Camp.” Said Monica, a British doctor.

Monica has worked at the foot of Mt. Qomolangma since the Spring of 2007. In the fall of 2007, she was also a medical worker at Mt. Qowowuyag, another mountain at more than 800 meters. She worked on the Nepal side of Mt. Qomolangma from 2009 through 2014.

She has worked at base camps for Mt. Manaslu, Mt. Makalu, and Mt. Ama Dablam since then. She spends four to five months every year providing medical help to hikers at base camps for the world’s tallest mountains. She is currently working at the base camp on the Tibetan side of Mt. Qomolangma. For a female doctor born to a Spanish family in Oxford, England, these places are very different from her native environment.

“The Nepalese side of Mt. Qomolangma is at 5300 meters, and relatively easier, but the Tibetan side is at an altitude of 6400 meters, so some people call it the zombie base camp.” Said Monica. “It looks abandoned and is deserted. There’s some people passing by in the morning when there is still sunlight, but after one in the afternoon, no one dares to leave their tent.”

Monica said this year is harder than last year. The past ten days had extremely severe weather with very limited daylight. The sky was covered in dark clouds and there was snow. The extreme cold and dampness made things very difficult.

The report said that only hikers with strong faith can sustain the extreme physical challenges of hiking. “At altitudes of 5500 to 6000 meters, almost everyone will feel the effects. You will have no appetite and lose weight, you’re not interested in anything. Your skin, mouth, nose, throat, and airways are very dry. You will have sores on your lips and fingers. After living here a while, I always get very weak and look ugly.” Monica said with a laugh. At altitudes of 7000 meters or higher, the injuries can be worse and even more dangerous. “You are more likely to have accidents in this kind of harsh weather conditions. Frostbite, hypothermia, nerve damage, and even death, happens all the time.”

Monica works for the Alpenglow Adventure Company, a business offering consulting services to Mt. Qomolangma hikers. “A fee of 15 thousand Euros will get you a hiking permit and lodging at the base camp. Paying 100 thousand Euros will get you accommodations at the highest level, including your personal Sherpa from the International Hiking and Sherpa Association, a fully-equipped base camp (with internet, heating stove, necessary foods, etc.), doctors, unlimited oxygen, and helicopter rides to the base camp.” Said Monica.

Many extreme sports enthusiasts who want to conquer Mt. Qomolangma need Sherpas, consultations, and help, and even a bit of cheer-leading, which has brought many opportunities to the Alpenglow Adventure Company. Oxygen tanks are the most expensive must-have products for hikers. “Our clients often start using oxygen tanks after 7000 meters, when they get ready to conquer the peak. I have seen a few people start using their tanks at the base camp, which is unusual.” She said.

In addition, oxygen tanks are a wonderful remedy in Monica’s medicine cabinet. “High altitude sickness is very common, cerebral edemas and pulmonary edemas are less common but also happen sometimes. There are other illnesses unrelated to the high altitude, such as cold syndrome, respiratory infections, and gastrointestinal infections. Minor infections from the cold weather may not be lethal, but will make you very uncomfortable, so a lot of people want to see doctors.” Said Monica.

The article said that for someone who lives at such high altitude for weeks at a time, the lack of oxygen, extreme cold, and sleep discomfort could all lead to health problems as well as extreme boredom. When clients and Sherpas are at the base camp, Monica passes the time with the radio and writing in journals. But when it’s time to hike the mountain peak, her schedule is completely different; she’s almost completely glued to the radio and surrounded by anxiety and uncertainty. She must be ready to make a prognosis for any medical emergency. “During those times, I’m more of a base camp coordinator than a doctor.”