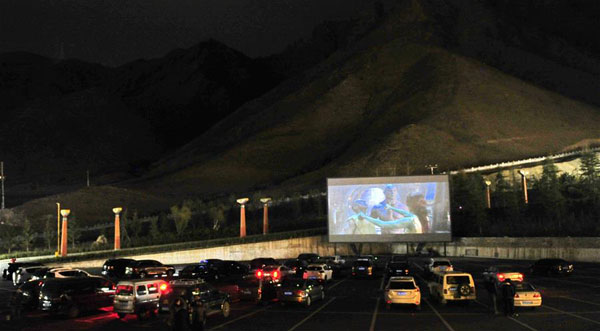 As a supporting facility for the epic drama Princess Wencheng, the Princess Wencheng Drive-in Movie Theater has been formally put into trail operation, the first drive-in movie theater in Tibet.

It adopts ultra large screen and the digital projector of world's top brand. It starts playing movie at 9:00 every night. After its formal operation in mid-May, it will show the latest domestic and foreign blockbusters simultaneously.  According to the relevant principal of the drive-in movie theater, in order to enrich the evening entertainment of local residents and visitors to Lhasa, revitalize the tourism in slack season there and strengthen cultural experience feelings of tourists and local people, the Princess Wencheng Drive-in Movie Theater was built at the Parking Lot 3 of the Epic Drama Princess Wencheng Tibetan Culture Theatre.

“In April of previous years, while people were waiting for the epic drama Princess Wencheng silently, the parking lot also looked desolate. However, the scene is different this year. People can come to see movies earlier,” the principal said.

After the drive-in movie theater was put into trial operation, domestic and foreign blockbusters which have been shown are available there. In the beginning, only some residents nearby came to see out of curiosity. But just after several days, the news spread from one to another. More and more local residents and tourists came to experience this unique evening recreation.

There are all together 119 parking spaces at the movie theater. Before the movie is shown at 9:00 every night, many audiences come by car so that the Parking Lot 3 became full in a short while. Others have to park their cars at other parking lots and then return to watch the movie on their feet.

The movie theater is a new cultural attraction for the people of Lhasa. It is also a must-see place for tourists to experience the Tibetan flavor.