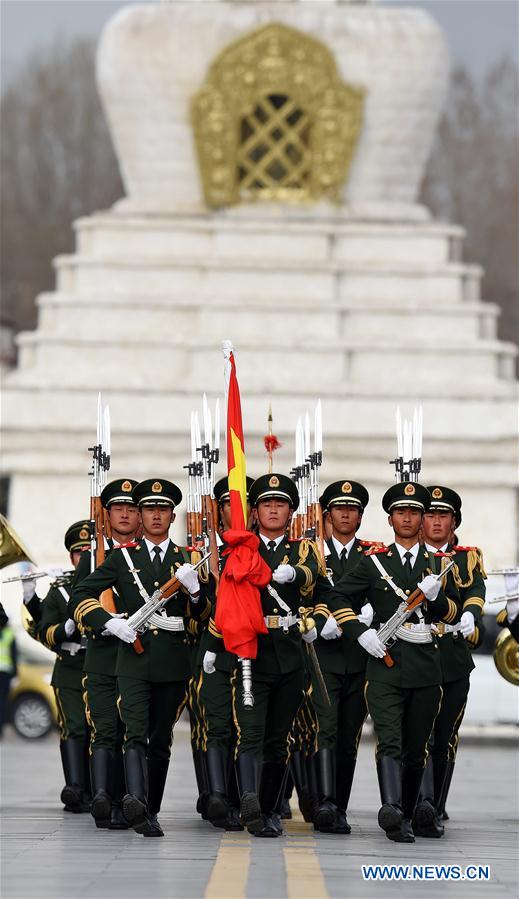 A flag-raising ceremony is held to celebrate the Serfs' Emancipation Day in Lhasa, southwest China's Tibet Autonomous Region, March 28, 2016. In 2009, March 28 was designated as the day to mark the freeing of 1 million people, or 90 percent of the region's population at that time, from the feudal serf system in 1959. (Xinhua/Chogo)

Losang Jamcan, chair of Tibet regional government, said in a speech that secessionist activities were doomed to fail.

"The clique of the 14th Dalai Lama has never ceased its attempts to split China. Such activities run counter to the constitution, state system and the interests of all people in Tibet, and are doomed to fail," he said.

The clique can not deny the great achievements Tibet has made under the leadership of the Communist Party of China (CPC), Losang Jamcan said, or dampen the resolution of all Chinese, including Tibetans, to safeguard national unity.

Tibet can only continue to advance and prosper by following the CPC leadership and the path of socialism, he said.

Che Zala, secretary of the Communist Party of China's Lhasa municipal committee, said 57 years ago the central government dissolved the old Tibet government, and ushered in a new era that would be characterized by the people of Tibet taking control of their own destinies and be masters of the region.

In 2009, March 28 was designated as the day to mark the freeing of 1 million people, or 90 percent of the region's population at that time, from the feudal serf system in 1959.

On Monday, some 3,000 people from all walks of life gathered at Potala Palace Square in the regional capital of Lhasa for a flag raising ceremony.

Kelsang Tsering, 73, was among the crowd.

"I have a pension and my three children have jobs. We do not have to worry about living now," he said.

"We live happy lives now. I hope I could live to 100 years old," said Dawa Dorlma, a young Tibetan girl at the square.

Tibet'sGDPsurpassed 100 billion yuan (15 billion U.S. dollars) in 2015 after 23 years of double-digit growth. Per capita disposable income for its rural residents increased to 8,244 yuan last year, double that of 2010.

The region has also led the country in offering 15-year free education and free health check-ups for rural and urban residents.

"Tibetans also play mobile phones at home, like many others," said Phuntsog, "We enjoy all the trappings of modern life."

Geleg Qoidar, 74, shared an old saying, which was popular when he was a serf.

"As a serf, you had to have legs of iron, a stomach the size of a bird and the eyes of an owl," he recalled .

"Serfs had endless things to do for their masters so they needed iron legs; they were always hungry so that they needed a small stomach; they had to work at night so they need owl's eyes," he explained.

Living in a two-story house with a big yard in Namkar Village in Lhasa, Geleg Qoidar is pleased with how his life has turned out. He enjoys a subsidy of 450 yuan each month as an old Communist Party of China (CPC)member. His family has an annual income of more than 10,000 yuan a year.

He said democratic reform in Tibet changed his fate. When serfdom was abolished on March 28, 1959, Geleg Qoidar was able to speak freely and go where he wanted.

"Having been tortured, I value real happiness," he said.