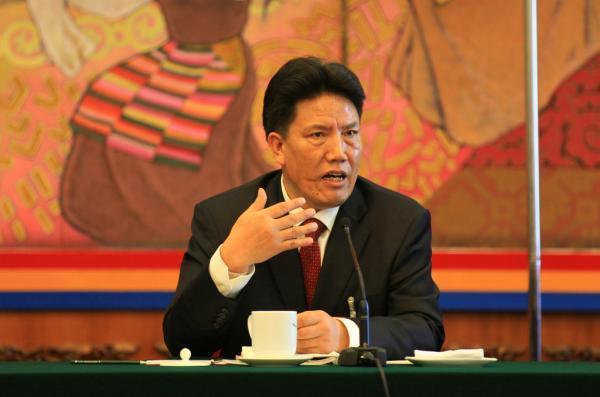 How to achieve the green development of Tibet has become a hot issue among deputies to the ongoing session of the National People's Congress (NPC) in Beijing. Among them, Losang Jamcan, chairman of the Tibet Autonomous Region (TAR), said ecological environment protection is the baseline of development in Tibet, which cannot afford to sustain any damage.

The chairman made the remarks during a special interview with China.org.cn on Monday, during which he further elaborated his views on the plans to eliminate poverty in Tibet and ensure construction of an advanced ecological civilization in the autonomous region.

Speaking of the goal set by Tibet for the 13th Five-Year Plan (2016-2020) to lift 590,000 of its population out of poverty, he explained that, thanks to the assistance from the central government and various regions of the hinterland, Tibet has been enabled to maintain comparatively rapid economic and social development, with the economic growth rate exceeding 11 percent last year.

"Particularly with infrastructure construction entering a period of rapid development, we are eagerly looking forward to the implementation of the 13th Five-Year Plan," he said.

"After the opening of the Qinghai-Tibet Highway, we seek an early start of the construction of the Sichuan-Tibet Railway that will exert an important practical significance on the development of western Tibet, even the development of Tibet as a whole, and the consolidation of the border areas in general," he said. The Qinghai-Tibet Highway refers to the 1,937-kilometer highway from Xining to Lhasa and the Sichuan-Tibet Railway is the 1,629-kilometer railway to be built from Chengdu to Lhasa.

Currently the social development trend in Tibet is harmonious and stable, with great changes taking place in the lives of all ethnic groups in the region thanks to the central government's policies. "Tibetan people have a deep understanding of the great motherland and the superiority of the socialist system, and they feel very happy about it," the TAR chairman said.

The chairman said that Tibet would rather have slower development than see its natural ecological environment being damaged. Currently, while dealing with mineral resource related projects, the government has taken a series of strict examination and approval measures and it would never introduce projects of a high polluting and high energy consumption nature, he stressed.