Human creativity and imagination as used in nature always brings revelations. Many highways in China, defying geographical and climate challenges, are construction wonders of the world. They could truly be called works of art.

Route 318 on the Sichuan-Tibet Highway, meandering its way up Nujiang Mountain, has been called the “Nujiang Highway of 72 Turns” or “99 Turns.” It is a true miracle of road construction. The road is 12 kilometers long, part of Baxoi County of Chamdo Prefecture in Tibet Autonomous Region, it is an essential part of the Southern route from Sichuan to Tibet. Everyone who has ever traveled on this route has marveled at its construction ingenuity. 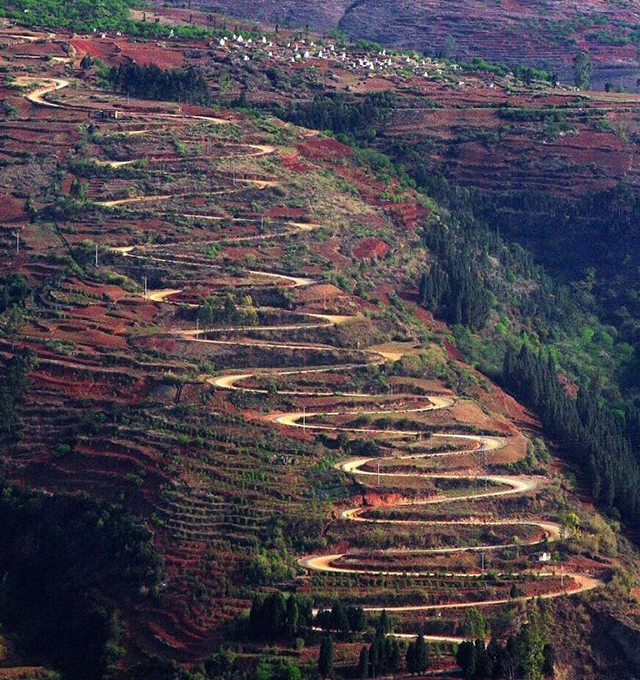 The Old Kunyi Highway in Yiliang County of Yunnan Province, with almost 70 turns, has the most turns for any highway in the world. There is a sharp turn every few meters on this road; its frequency has surpassed the “Sichuan-Tibet Highway of 72 Turns,” considered by many to be the most circuitous Chinese highway.

“The Road to Heaven” on Tianmen Mountain in Zhangjiajie of Hunan Province, is considered number one among all of China’s top 10 sky way. There are 99 turns on the 10-plus-kilometer-long road, which include 180-degree sharp U-turns. Driving on a road like this would even make an experienced driver nervous.

The War of Resistance Highway in Qinglong of Guizhou Province, with 24 turns, is a symbol for the Stiwell Road(Ledo Road). The linear distance from the foot to the top of the mountain is 350 meters, with a vertical drop of about 260 meters. The road climbs onto the mountain in an S-shape on a slope of about 60 degrees, with about four kilometers in distance.

The Aizhai Highway in Jishou, Hunan Province, has been called the “Highway Marvel of Aizhai,” and is a major attraction in western Hunan. The road is filled with hair-raising turns and is one of the hardest routes to navigate in China, in fact, there is traffic police guarding each turn 24/7.

Badawan Highway in Liupanshui of Guizhou Province is also extraordinarily risky. There are eight sharp U-turns on the same side of the mountain. Many racing drivers from the plains have never seen any road this tumultuous, which has helped to grow the road’s reputation; the route is now the biggest highlight in Guizhou’s rally racing tournaments.

Daguaiwan of the Jinsha River, also known as the “Number One Bay of the Jinsha River,” is located inside Zigengxiang of Dêrong County, and at the junction of Sichuan, Yunnan, and Tibet. The Dingqu River, which flows from North to South across the region, after being joined by Mayi River and Shuoqu River, eventually merges with the Jinsha River, forming the grand sight of “Three Mountains with Two Rivers” at the rivers’ meeting point.