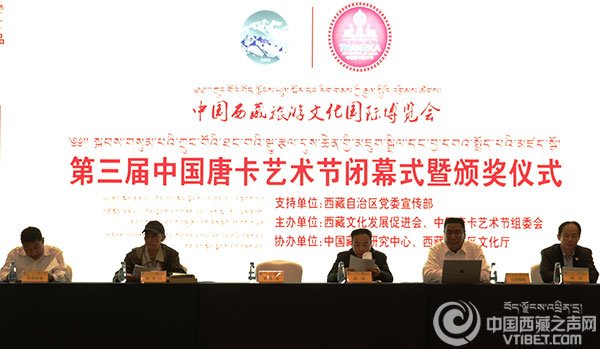 The 3rd Annual Chinese Thangka Art Festival drew to a close in Lhasa on September 14th. There were more than 300 pieces of art on display, with the biggest regional coverage and most diverse schools of art.

More than six thousand Thangka art workers participated in the preparation, art works' collection, and hosting of the festival. They selected 300-plus pieces from more than 2700 pieces for the elite art show and trade show. All five major schools of Thangka art were shown: Qiwu Gampa, Miangtang, Khentse, Karma Karchi and Mensa. In addition to Thangka art on fabric and paper, there was also Thangka featuring embroidery, brocade, kesi (Chinese silk tapestry), and applique.

Chinese Thangka Art Festival has produced an even better overall effect with better standardization and more systemic and fairness in judging, since its success in 2014. The festival has promoted the inheritance and prosperity of Thangka art in both theory and practice, comprehensively expanded the influence and reach of Thangka art, and made the art festival an international-level event and the best calling card for Tibetan culture.