Editor's note: The Sichuan-Tibet Plateau, a beautiful region that reaches toward the heavens, is a place showered with blue skies, covered in white clouds, and dotted with snow-covered mountains, but recently, something truly remarkable has been materializing among the households that call this place home. A groundbreaking historic change has been reshaping the land and its people. From today on, we will publish a series of stories to tell you those changes. 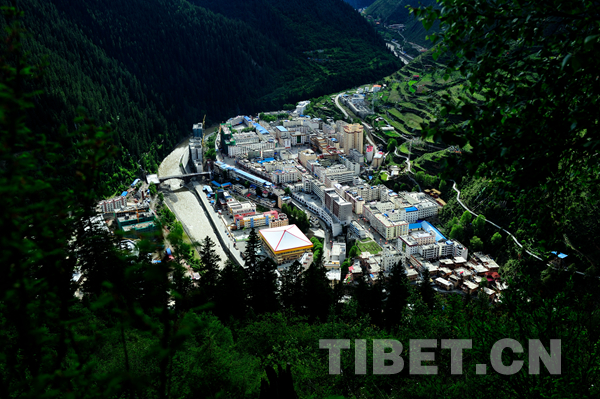 At an altitude of 3,285 meters (10,777.5 feet), Rangtang County within Aba Tibetan and Qiang Autonomous Prefecture is located upstream Dadu River bordering on Qinghai Province. Rangtang means "the dam of the God of Fortune" in Tibetan, but with difficult traffic and unfavorable natural conditions, poverty is ironically nothing unheard of in the area.

Looking at dozens of yaks for sale, a man named Dongzhou frowned, and his already existing wrinkles grew ever deeper on his forehead.

Dongzhou is from a registered poor household in Chaka Village, which is one of the villages with the poorest conditions in Rangtang County. At an average altitude of almost 4,000 meters (13,123 feet), Chaka is located on the upper side of the main town of Rangtang. The village has 40 households with a total of 143 people, with every single one of them herders.67 villagers in 23 households are registered as poor households, and in 2015, the village had a total of 356 yaks on hand. The Buddhist principle of ahimsa has led to the people being reluctant to sell the animals, with them only being used for making milk and butter, and the annual per-capita income of the village is only 2,300 yuan (351 USD), far below the standard national poverty line.

In the beginning of 2016, as part of the benefits it received toward poverty relief efforts, Chaka Village set up a collective pasture, and since Dongzhou was highly experienced in herding yaks, he was selected by the villagers to oversee the project. Thanks to the hard worker's painstaking labor, the dozens upon dozens of yaks he raised had become strong and sturdy, and one day in September, when the yaks were nearly for slaughter, the man made a phone call to a yak dealer, who balked at the idea that there were so many available for sale and made the excuse that he could not come due to the yak market supposedly becoming stagnant. Several calls later, Dongzhou finally realized that he had to lower the price of each yak by 1,000 yuan (153 USD) in order to make a solid deal, and this fact came as a sobering surprise to the herder. He sat down and worked out the calculations, and it became clear that after having to pay 300 yuan (46 USD) to the village for each yak and buy calves out of his own pocket after the adults have been sold, he would not only not break even on the deal, but even possibly suffer a great amount of loss.

The Chinese version of this story is written by Li Dayong, Jia Yonghe, Yang Jing,& Lan Xin and translated into English by Huang Wenjuan. And the story is sourced from the United Front Work Deparment of the Communist Party of China (CPC)Sichuan Provincial Committee.