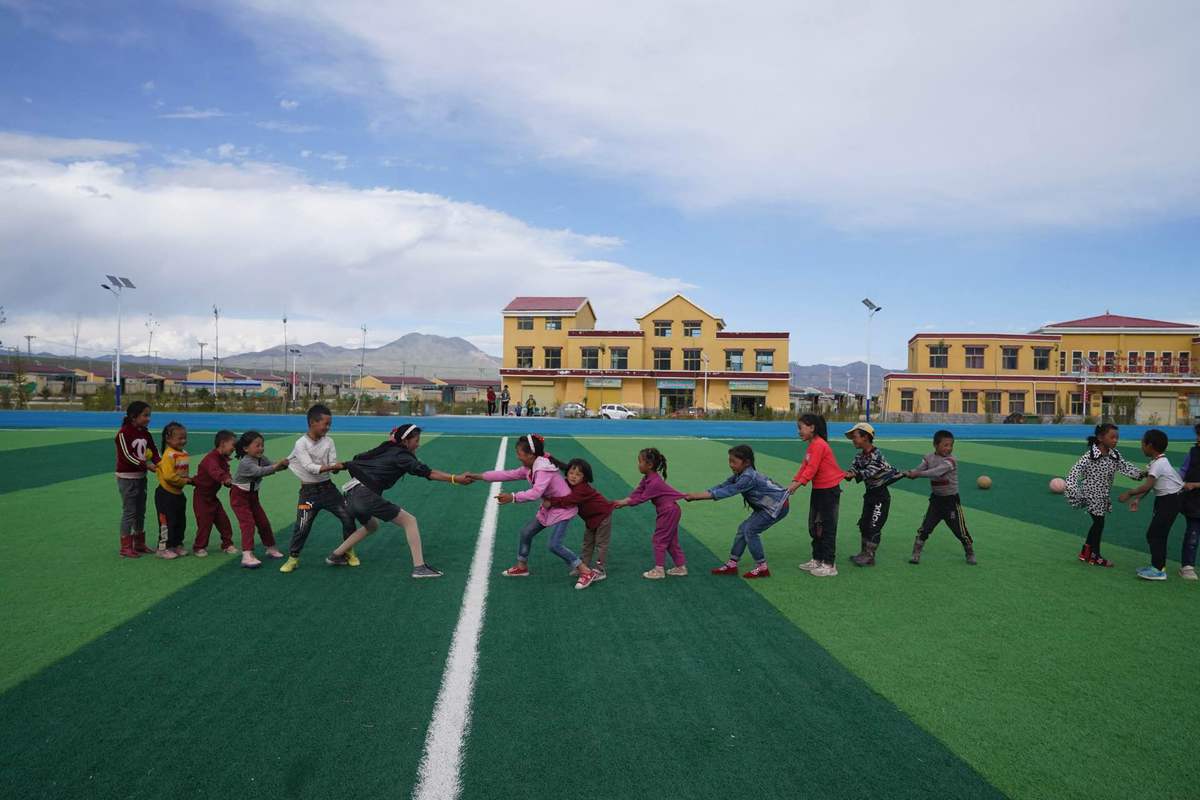 It's the summer holidays, and the kindergarten in Qabqa, Qinghai province, is quiet and bathed in sunshine.

However, 5-year-old Dorje Wangyal is keeping busy with his classmates who live in the same neighborhood. They play all day, watch TV, or sometimes go shopping with their families in the town 1.5 kilometers away. Shopping is Dorje Wangyal's favorite pastime, as he can buy the desserts he likes.

He and other children from more than 100 impoverished families have been resettled in the town in Gonghe county, Hainan Tibetan autonomous prefecture. The kindergarten was built for children who had previously lived in remote areas, or who were from nomadic families, and were unable to go to school.

"I like it here, the house, the friends and the school," Dorje Wangyal said in broken Mandarin, which he has just begun learning.

Three years ago, his life was very different when his home was on grazing land 75 km from Qabqa. His father died when he was a toddler and the boy was raised by his grandparents.

The hut they lived in had no power and they had to travel 20 km to fetch water. The cold winter nights were hard to get through, and the only way to keep warm was to burn cow dung. The smell would linger in the cottage throughout the winter.

The family lived on the meager income earned from sheep products such as wool and milk. As Dorje Wangyal grew older, it became harder for the family to make ends meet, let alone send him to kindergarten. 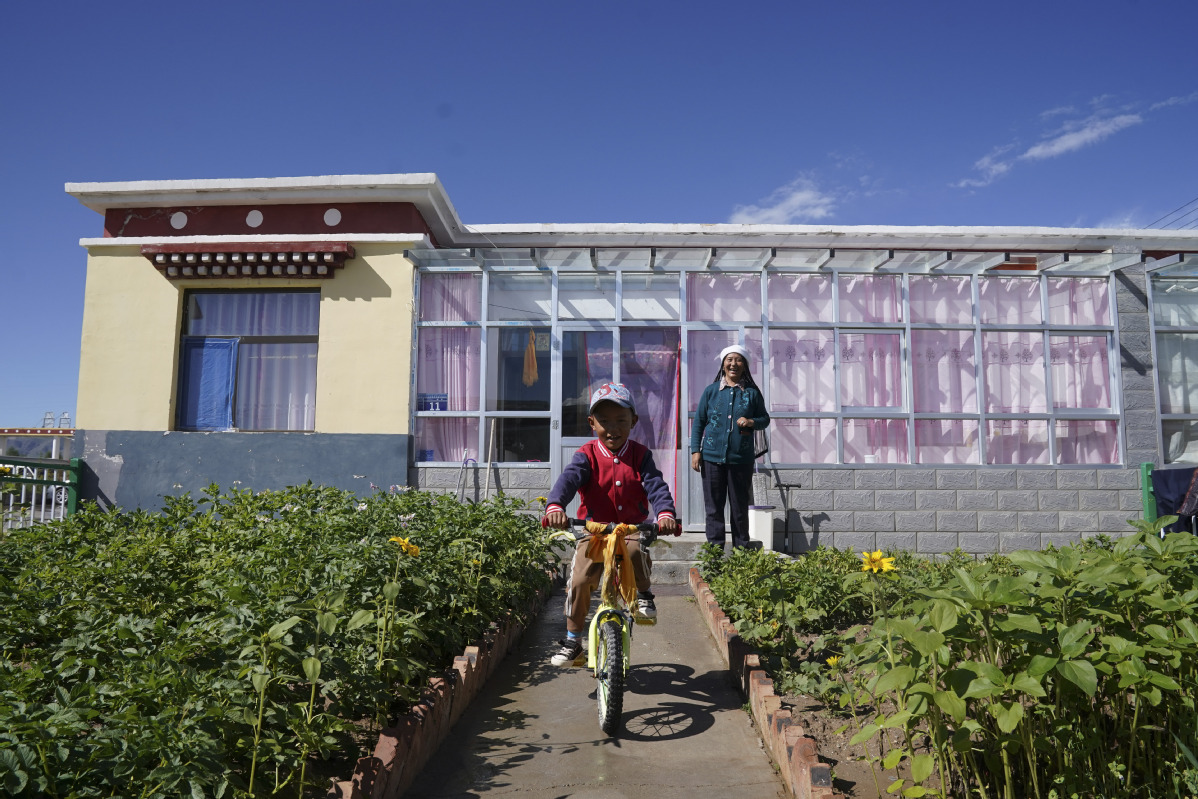 In 2017, as part of national poverty alleviation efforts, the local government started to resettle impoverished families such as Dorje Wangyal's to areas near Qabqa, which has made life easier for them.

Providing them with housing was the first priority. Within two years, 94 buildings with water, power and heating were constructed, benefiting 144 households.

"We aimed at housing those scattered and vulnerable poor households who couldn't make a living from herding," said Ma Lan, a member of the Party committee of Niandi village.

"The resettlement project cost 25.5 million yuan ($3.73 million), with 86 percent of the money coming from the central government."

A targeted approach to poverty alleviation is widely used in Qinghai. To determine poverty-stricken households, criteria such as annual income, living and health conditions, literacy levels and compulsory education are taken into account.

When an application for resettlement is submitted, a household is evaluated from township to county level. If the application is successful, the result is made public.

However, resettlement is not the only help the impoverished households receive. Under the guidance of the local government, cooperatives have been set up, in which the impoverished households place their sheep and cows as an investment. Annual dividends paid by the cooperatives allow the resettled herders to buy feed and hire other workers to do their traditional work. This frees them up to look for other jobs or learn new skills, such as vehicle maintenance and cooking, to improve their work prospects.

Shimar Tenzin, an official of Wenquan township, Xinghai county said, "Our mission is to ensure that at least one member of every family gets a job after resettlement so that each household has a stable income in the future."

Drolkar, 18, who goes by one name, resettled with her family in Maqen county, Golog Tibetan autonomous prefecture, last year. Moving near a town enabled her to finish high school. After graduation, she became a part-time ranger, a local government job that pays 1,800 yuan a month.

"I'm saving money now. Hopefully I can take my 85-year-old grandpa to Tibet for a pilgrimage. This is his long-cherished wish," she said.

"To me, living such a secure life with my family is moderate prosperity itself."

Dorje Drolma, 16, and her family resettled in a neighborhood named Jiumei, which means "long-lasting happiness", in Maqen county in 2018.

"Before we moved here, one of the biggest problems was going to the toilet. We had to find a place outdoors where no one could see us, which was very inconvenient and embarrassing," she said.

"It's not a problem anymore. We can even take a shower every day, which was unimaginable before. Our new home is much more private and hygienic."

Before, they lived in Dangluo, an extremely poor village in Golog. Dorje Drolma's mother was the family's sole breadwinner and earned 1,000 yuan a month as a cook.

Her younger brother Samtan Tobgyal, 13, said: "Mom rarely smiled. I knew she was unhappy. Affected by her mood, my sister and I were unhappy, too. We performed poorly in our studies. After we moved here, she found a better job in the town. The school here is much better and we have made huge progress. I often hear my mom laugh now."

Samtan Tobgyal said he has realized that the world is a bigger place than he thought, and he must study hard to do well in life. "I'm already among the top students in my class. My ideal university is Tsinghua," he said.

Dorje Drolma said reading and writing are her passions.

"We have great Mandarin teachers at school and I can read a lot more fantastic books than before. I'm reading the Harry Potter series. I hope I can introduce this intriguing story in Tibetan to more kids someday," she said.

Jiumei is the largest resettlement site in Maqen county, housing 716 households by the end of last year.

A scholar from Qinghai Academy of Social Science, who asked to remain anonymous, said resettlement is just the first step. "There is a long way to go to help these families be independent, but the significance of the program is that it offers a better environment for their children to grow up in. These kids have a broader horizon and more possibilities than their elders had. They are the ones who will create Qinghai's future. They can make a difference."

According to Qinghai's Poverty Alleviation Bureau, the province has 1,249 resettlement villages scattered across eight cities and prefectures, helping to lift 52,000 households, or 200,000 people, out of poverty.