With its high altitudes, vast mountains and deserts that form the unique plateau climate, Qinghai province in Northwest China is hosting to international sports, in an effort to boost its economic development and promote itself worldwide.

Revolving around Qinghai's landmark lake, a series of races and competitions have been held. Among them is the annual Tour of Qinghai Lake cycling competition.

Its latest session started on July 13 in Haidong in Qinghai province. The race went through neighboring Gansu province and ended in Yinchuan, Ningxia Hui autonomous region, on July 27. Taking part were 149 cyclists from 17 countries.

After 18 years of development, the competition has become a branded event with international influence, representing a healthy lifestyle.

After finishing the 3,001-kilometer race, the Medellin team from Colombia, the Marseille team from France and China's Qinghai Tianyoude Cycling Team won the top three prizes.

The local government said the greatest value, responsibility and potential of Qinghai lies in the local ecosystem. As a result, the cycling event's organizing committee cooperates with the China Green Foundation and the China Wildlife Conservation Association every year. Together they protect the environment along the race route by setting up garbage disposal facilities.

The local government said through the competition, more people learn about Qinghai and appreciate the natural scenery.

The province also hosted an international electric car event this year. The sixth China EV Rally, Qinghai Lake, which kicked off on June 20, evaluated and tested the quality of electric vehicles. This included battery range, charging time and power-saving capacity.

Many industry experts attended the launch ceremony and remarked Qinghai as a shining example of China's lithium industry development. They also expressed their confidence in Qinghai's lithium resources and clean energy.

A total of 13 models competed, including FAW Hongqi's first electric SUV E-HS3. It was the first time for Hongqi to participate in the China EV Rally. The carmaker said it plans to launch more electric models in the future and hopes to test more of them at the rally.

Through the competition, Qinghai province has promoted the applications of technologies relating to electric vehicles and lithium batteries. This has enhanced the use of local lithium resources to stimulate the development of related industries.

The event is not only a response to the central government's call to encourage the development of the new energy vehicle sector. It also provides Qinghai with opportunities to promote sustainable growth, the local government said.

The province plans to increase its production of lithium carbonate to 125,000 metric tons by 2020.

Bi Wenjing, a world champion gymnast who serves as the ambassador of the event, said that she has participated in the rally three times.

Bi added that she felt that the performance of new energy vehicles is getting better and the testing of electric cars are constantly being updated. 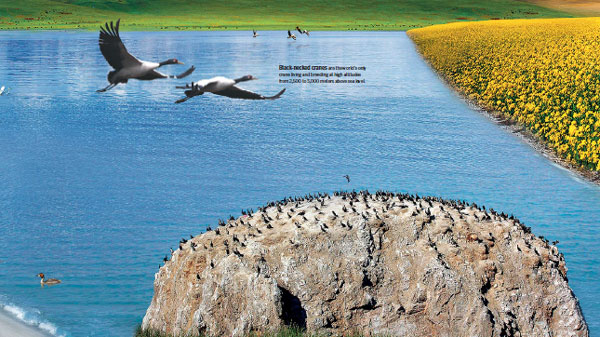 Black-necked cranes are the world's only crane living and breeding at high altitudes from 2,500 to 5,000 meters above sea level.

Qinghai Lake in the northeast of the Qinghai-Tibet Plateau, at 3,196 meters above sea level, is China's largest inland and saltwater lake. Boasting a surface area of 4,516.23 square kilometers when measured in February, it is of great significance to protecting local ecological safety and preventing desertification. Many species of water birds come to nest and rest there during their migrations and it is the only habitat of endangered Przewalski's gazelles. Thanks to the local government's effort to protect biodiversity and reduce the interference of human activities, the lake's ecosystem has improved. As a nature reserve, it is a popular tourist destination. The lake provides impressive views in summer, when yellow cole flowers are in full bloom around the lake, against the backdrop of the stunning surrounding mountains.

Bukadaban Peak, also known as Xinqingfeng Peak, is the highest point in Qinghai province, standing at 6,860 meters above sea level. The peak lies on the border between the Xinjiang Uygur autonomous region and Qinghai province. It is part of the Kunlun Mountains, one of the longest mountain ranges in Asia. Kunlun Mountains extends from the Pamirs in Tajikistan in the west to the Kunlun Pass and mountain ranges in Qinghai province in the east. Bukadaban Peak's name is borrowed from the Uyghur phrase for "bison peak". The snow-capped mountain is part of Hoh Xil, which is a region in the northeastern part of the Qinghai-Tibet Plateau and is considered the world's largest, highest and youngest plateau with more than 230 species of wild animals. 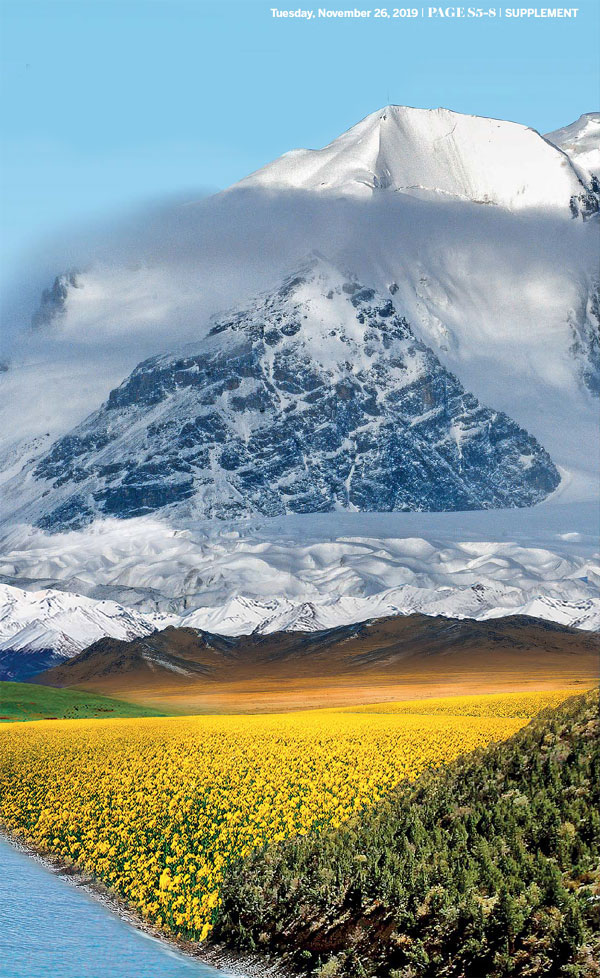