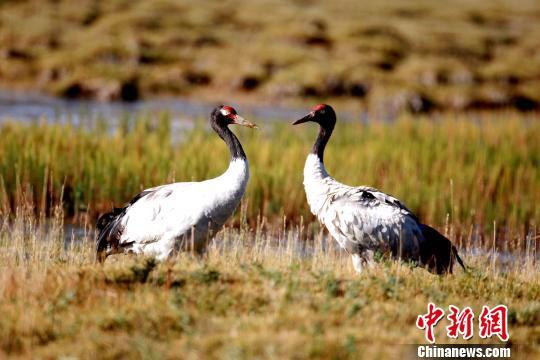 "In the past two years, the number of black-necked cranes has surpassed 180 and stayed steady in their population inside the Rongpo National Nature Conservation District and the Gyatang Meadows at the source of the Yangtze River in Yushu Prefecture of Qinghai Province," said Zhaoxiang, director of the Three Rivers Source Program of the Shanshui Natural Protection Center, a non-governmental organization on natural protection in China, during an interview.

Around May of every year, black-necked cranes incubate on the Qinghai-Tibet Plateau; by the end of Oct, the cranes and their young migrate to warmer area in southern Tibet and Yunnan Province. According to conservative estimate of present species' distribution, there're more than 1,500 black-necked cranes inhabiting at the source of the Yangtze River, the Yellow River, and the Lancang River.

Wang Enguang, Vice Chief of the Department of Forestry in Qinghai Province, explained that black-necked cranes and other water fowls are selective of their living environment, so the fact that they are here indicates the improvement of the local ecology.