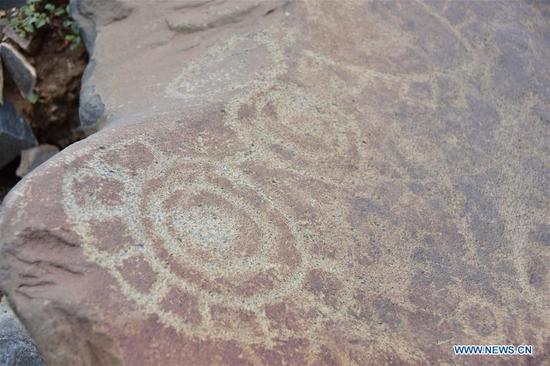 The government of Chindu County, Yushu Tibetan Autonomous Prefecture, confirmed on Wednesday that 609 rock paintings have been discovered.

Wei Jian, deputy director of Chinese Society of Rock Painting, said that the paintings were created over a wide time span with the oldest dating back 2,000 years.

Villagers discovered the paintings on May 5, and immediately reported the finding to the local authorities.

Wei said one of the paintings is of a human figure waving something like a flag with left hand, and using the right hand in gesture like a salute.

The county is located near the source of the Yangtze River. Rock paintings by ancient Qiang people during a period from 1,000 B.C. to the late Tang Dynasty (618-907) have been found in neighboring areas. The paintings depict various activities, including hunting, herding, sexual intercourse and sacrifices.