It was a summer evening in the late 1990s. Tsering Samdrup, then in his 20s, was driving with his fellow patrolmen around Zhuonai Lake in Hoh Xil, in Qinghai province, where tens of thousands of Tibetan antelopes from Tibet, the Xinjiang Uygur autonomous regions and Three-River-Source region in Qinghai had arrived at the end of May and the start of June.

Suddenly they stopped the vehicle and stayed put.

"About a dozen meters away, a huge brown bear with its back to us was busy digging a hole looking for marmots." says Tsering, 43.

The brown bear soon pulled a marmot out of the hole, alive and kicking, but just tucked it under its left arm and continued digging.

Another unlucky marmot was soon drawn out.

The bear then hastily tried to tuck the second marmot under its left arm, forgetting there was one there already.

So, as it raised its left arm, the first marmot dropped down and ran away, replaced by the second one.

The bear dug out six marmots in total, but only got away with the last one.

The big fluffy predator was unaware of the presence of the amused humans in the car.

"If bears get something to eat, they have no time for you," says Tsering.

But this was not the closest he got to bears. 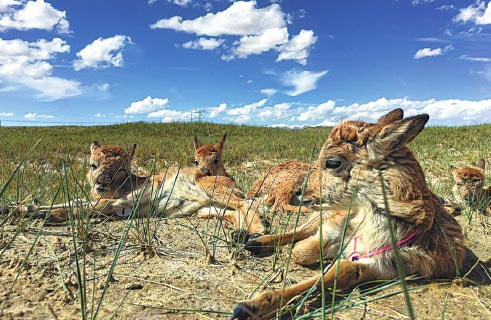 Tibetan antelopes from Tibet, the Xinjiang Uygur autonomous regions and Three-River-Source region in Qinghai arrive at Zhuonai Lake in Hoh Xil, Qinghai province at the end of May and the start of June. [Photo provided to China Daily]

On many summer nights in the 20 years since he arrived in Hoh Xil, at 4,600 meters above the sea, from his hometown in the Yushu Tibetan autonomous prefecture in 1997, he and his fellow patrolmen have had to remain in their tents with their guns loaded as they listened to the heavy breathing of brown bears.

"Typically it was a family, a mother leading two or three cubs. But they never came in and would just circle our tents for several hours and leave," he says.

Tsering landed in Hoh Xil in 1997, two years after being discharged from military service.

Since he blacked out due to altitude sickness two years ago and stayed in bed for 20 days, he has been transferred to the publicity department of Hoh Xil National Nature Reserve Administration in Golmud, the second largest city in Qinghai in terms of population. Earlier this year, Hoh Xil was listed by the UNESCO as a world natural heritage.

Speaking of how he decided to take the job 18 years ago, he says: "I had heard about illegal hunting there, and the sacrifice of Sonam Dargye to protect Tibetan antelopes.

"My mother didn't want me to go, worrying about the altitude. But I didn't worry that much."

Describing the job, he says that the first patrolmen in Hoh Xil－Tsering and the other members in the protection station at Wudaoliang－only knew that they were there to protect Tibetan antelopes, but no one had seen one or knew what they looked like.

Back in 1997, the number of Tibetan antelopes were fewer as tens of thousands of them had been killed by poachers who would kill them and sell their wool to make shahtoosh (shawls) that were popular with the rich.

It was not until dusk on their second day at work that Tsering and his fellow patrolmen saw Tibetan antelopes from afar.

On seeing them the patrolmen asked each other: "Are they the legendary Tibetan antelopes? Nobody knew."

The core area of Hoh Xil, where Tibetan antelopes give birth, lies around the Zhuonai Lake and Taiyang Lake, respectively, about 140 kilometers and more than 300 km from the protection stations along the Qinghai-Tibet Railway line.

There, the weather changes rapidly as one goes deeper into the mountains.

The temperature can go as low as-46 C.

Even in summer, the temperature during the night is about -17 C.

An extremely difficult terrain with countless lakes and bogs, it is no man's land but a wild animal paradise.

Over the years, the men have patrolled the mountains of what is called the third pole, fought poachers and illegal gold miners.

The south of the mountains are the upper reaches of China's longest river, the Yangtze.

Once, in a stony hollow, they came across a lonely rutting male wild yak, who ran madly at them, eyes shining and tongue lolling out like a dog.

It knocked over their vehicle as easily as a man kicks a stone over.

Another summer night, sleeping in the vehicle with its heating system on, they were woken up by two wolves whose paws made squeaky noises as they climbed on the front windscreen trying to steal meat kept on the roof.

But what makes Tsering want to stay in Hoh Xil despite its harsh natural environment is its beauty, freedom and loveliness.

"It is amazing to see tens of thousands of Tibetan antelopes travel thousands of kilometers, crossing so many mountains and rivers through rain, snow and hail, and threatened by predators such as wolves and foxes, just to give birth on the grasslands around Zhuonai and Taiyang," he says, adding that "nobody knows why it has to be there".

"But they are all be gone before mid-August. It's an amazing scene. One night you see more than 20,000 mothers and babies resting on the grassland. And the next morning when you walk out of your tent you will find they have all disappeared. You have no idea how they vanished."

The patrols stay in their makeshift protection station for two weeks. And if they find baby antelopes hurt or left alone they take them and care for them.

Back in late 1990s and early 2000s, when the Tibetan antelope protection center had not been built, the men and the baby antelopes would all live together.

"They were very naughty. They would sleep with us on the ground, but they would wet our quilts, two or three times a night. If we couldn't stand the wet quilt we would just turn it over and continue to sleep."

He says that after so many years he has a really deep affection for the land and the animals.

"One of the most comforting things is that now you can see Tibetan antelopes, Tibetan wild donkeys and Tibetan gazelle grazing casually along the Qinghai-Tibet railway line and highway. There are many heavy trucks on the road but the animals are used to the hustle and bustle. After two decades of protection they know that most humans won't hurt them."