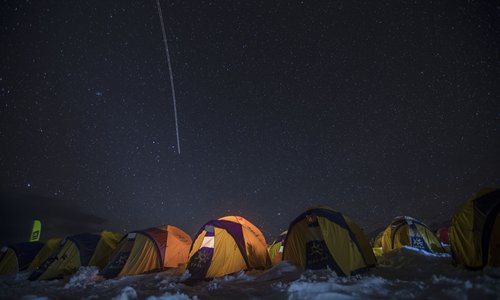 The summer season has come early for many cities in China this month, leading many to think about ways to dodge the scorching heat. Now there is a new option they can consider: heading to the mountains.

In Northwest China's Qinghai Province, Mountain Gangshika offers travelers an experience that will make them think they have traveled through time: fresh snow on the highlands.

Getting to Gangshika is easy. From the provincial capital of Xining, it takes only about three hours by bus to reach the foot of the mountain. There's also a quicker option - take a high speed train to the station at the -Menyuan Hui Autonomous County and head out from there.

Gangshika, whose peak sits at 5,254 meters above sea level in the eastern part of the Qilian Mountains, is often considered a suitable place for beginning mountaineers.

But, make sure you are prepared for some altitude sickness - the foot of the mountain sits at an altitude of about 2,500 meters above sea level.

The road toward the peak of Gangshika - which literally means "the grandfather of snow mountains" in Tibetan - is rough, but it's still an ideal place if you are looking for an original nature experience.

The walking path starts at about 3,700 meters and involves a 3.4-kilometer trudge to a base camp at about 4,360 meters above sea level. Stones and snow cover the road, so it would be wise to bring an alpenstock with you.

Try to keep your backpack as light as possible, but several things are necessary: sunscreen to resist the strong UV rays at high altitude and some hot water to keep yourself hydrated.

Do not forget to prepare some food. -Experienced mountaineers- recommend nuts, which are light in weight but high in calories.

It is always a good idea to wear waterproof clothing, including wearing gaiters, when hiking up a snowy mountain.

It was very snowy and windy the day I made it to the base camp. It took me about two and half hours to finish the 3.4-kilometer walk, and I had to rest by the side of the hiking path several times because I felt dizzy.

Don't try walking all the way nonstop. If you feel tired, take a break so you can catch your breath. Don't worry if you run out of water, you can always try melting snow.

Make sure you wear a hat to keep your head warm, which also helps combat altitude sickness.

Hiking does not have to be a one-man battle against nature. Feel free to link up to others who are taking the same path, that way if someone has any problems, the others can extend them a helping hand.

Camping in a tent

Though there is a wooden house at the base camp, but there were also plenty of tents pitched next to each other. Since I wanted to experience nature as much as I could, I chose to sleep in a tent rather than the wooden house.

Thanks to a horse caravan that brought supplies to the base camp, we had plenty of potable hot water as well as food inside the house.

Everyone at the camp must have been very hungry by dinner time after an exhausting day since they quickly polished off the food that was served in less than 10 minutes.

Mountaineering experts recommend you do not fall asleep before 10 pm, as the thin air in the mountains makes people wake up very early the next day. If you don't want to face a grueling sleepless night, just follow the rules.

I was also told not to pile up the snow to cover the rims of my tent, since that could keep fresh air from getting in the tent and lead to me suffocating.

Though I rigorously followed these suggestions, my first time tent-sleeping eventually turned out to be a disaster.

The strong wind - estimated to be at least a seven on the Beaufort scale - had forced snow into the tent.

My sleeping bag as well as my hat was entirely covered in a layer of white snow. It was a really weird feeling to feel that every part of me was warm, except my face as snowflakes continually fell on it.

The toilet is about 50 meters away from the wooden house, so plan your trips to answer Nature's call carefully.

There is no hot water to wash or brush your teeth, so you might want to bring some wet wipes.

Interestingly enough, it is forbidden to use toothpaste on the mountain. For this reason, some people decide to use salt instead.

Drinking plenty of hot water is a good way to lessen the nausea caused by altitude sickness. It's recommended that you drink at least four liters of water a day when at high altitudes. 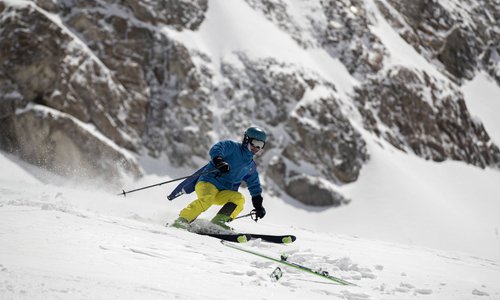 The bad night I had in my tent left me too drained to move to a higher location.

Since Gangshika was hosting a ski mountaineering event, I decided to talk to some experts about the sport.

As the name indicates, the sport combines mountaineering and skiing. Athletes make their way up the mountain with their skis - either wearing them or carrying them - and then ski their way down.

The first ski mountaineering event was held on Gangshika in 2011.

According to Zhang Yaohua, a senior official with the Chinese Mountaineering Association, there are only about 200 professional Chinese athletes in this sport and about 5,000 enthusiasts. He pointed out that it is gaining in popularity though.

After China won the right to host the 2022 Winter Olympic Games, it has begun promoting winter sports in earnest. With this push, it is estimated that the number of Chinese skiers is sure to rise.

Wang Yongfeng, vice president of the Chinese Mountaineering Association, said Gangshika's abundant snow has made it a good place for ski mountaineering.

"The difficulty of the runs on the slopes can be easily distinguished by the different altitudes," Wang said. "The added difficulty the high altitude also brings some extra excitement to competitors."

"But there are risks involved in ski mountaineering, which means we have to make safety a top priority."

Ravi Everest, a seasoned mountaineer from Malaysia who has spent his life mountaineering, is new to this mountaineering sport involving snow, which is a rare sight in tropical Malaysia.

"My dream is to climb a mountain and then ski down," said Everest.- "In Malaysia we don't have anyone with such expertise.

"That's the reason I came here. So I can learn as much as possible and introduce this sport to Malaysia and Southeast Asia."

Italian Andrea Gianni, who was on his second trip to Gangshika, said safety is the most important thing when ski mountaineering at Gangshika.

"Everything is natural here. There is also enough snow to wear your ski board around base camp," Gianni said. "The only thing I need to worry about is safety, in case there are potential avalanches and crevasses."

"We don't need cable cars to get to the base camp, but instead must rely on our own two feet. It's more athletic and healthy that way," the Italian added.

Bi Wenzhong, a medical expert with the Chinese Mountaineering Team, warned that athletes should pay real attention to altitude sickness.

"It is important to bring some medicine in case you catch a cold, which can quickly worsen at high altitudes," Bi said.

My second night on the mountain was very calm. The strong winds had stopped and I could see countless stars dotting the sky over my tent.

I regret that I didn't bring a camera to -capture the scene, since my iPhone wasn't good enough to capture the beauty of the night.

Walking downhill didn't take that long. As we descended that day, the snow started to melt, making parts of the road icy and slippery.

It took me only one hour to return to the start of the path at the 3,700 meter point.

Walking down isn't that hard, so you will be able to better enjoy the grandiose Qilian Mountains.

The snow white mountain tops reached up to touch the white clouds that rested peacefully among the azure sky.

Local authorities have planned to build a -cable car on Gangshika, so in the future -getting to the base camp may not be that rough.

Life on the mountain may be hard, but I am already looking forward to a return trip to Gangshika.

1. Bring a head lamp in case you need to do something at night.

2. It's better to pair up with someone in a tent at night in case of emergency.

3. Sweating means losing salt, so make sure you bring some tablets to replenish what you lost.

4. You won't be able to get a signal on your phone at Gangshika, so you might want to invest in a pair of walkie-talkies to keep in contact with your partner.

5. Sleeping bags and a waterproof cushion are must-haves when camping in a tent on the mountain.

7. Try to keep your skin covered as much as possible to avoid windburn.