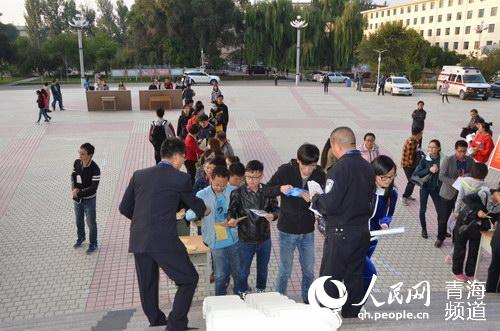 This is the second time I am taking part in the national judicial examination. Last year I answered using a test sheet printed in Chinese, this year I used Tibetan language to answer. It was very necessary that Qinghai established the Tibetan language examination site as it makes it very convenient for us to take the exam. Other than this, Tibetan language is our strength, I believe that I will pass the exam this year,” said Yangkyi Tsering confidently.

The national judicial examination was held on September the 24th. Under the assistant of the staff, Yangkyi Tsering, an examinee from the Hainan Tibetan Autonomous Prefecture of Qinghai province, passed the security check and facial recognition verification.

This is the first time that the Tibetan-language-standardized examination site was established in Qinghai.

Ren Xuerong, the Director of the Office of Qinghai Judicial Examination indicated, the Qinghai Tibetan area lacks legal personnel that have mastered both the Tibetan and Chinese languages, which has led to the fact that the Tibetan-Chinese bilingual staff on-site are not qualified enough. In the entire province, there are 14 counties which do not have officially professional lawyers and there are 16 counties which do not have professional legal notaries.

Targeting this problem, the Department of Justice of Qinghai Province has continuously coordinated with the Ministry of Justice for 2 years, and finally got approved and supported this year – establishing for the first time the examination paper in Tibetan as well as the Tibetan language examination site, which is the second province nationwide that has realized this since the founding of the Tibet Autonomous Region.

Comparing with the past, the number of registered examinees has highly increased this year numbering to 2,743 people in the whole province which increased 31.24% when compared with last year, thereby taking second place nationally.

"Using the security check and facial recognition verification methods will ensure fairness for all of the examinees, which has effectively prevented all kinds of fraud during the examination. I believe this is very good and I support this.”, said Yangkyi Tsering.

"The original Tibetan language examination site was in Tibet, it is too far, I did not go there to take the exam. This year it is very convenient. It took only four hours to come to the examination site.”, said Yangmaocai, an examinee from the Court of the Tsekhok County in the Huangnan Tibetan Autonomous Prefecture of Qinghai, “the facilities in the examination site are very convenient for us who work in the Tibetan inhabited areas, which is very encouraging and enables us during the promotion of law study, helping us improve our professional ability.”