Up until present numbers of the Tibetan antelope have surpassed 60,000 within the nature reserve as well as in neighbouring areas, Xinhua reported.

Hoxil has been nicknamed the gene pool for the Qinghai-Tibet plateau wild animal species,  furthermore, it was the first natural protection area in which facilities were set up to protect the Tibetan antelopes. Other than this, water resources are also rich within the reserve and it is in an important building block to the “Water Tower of China”.  At the same time, it has been impacted relatively less by human activities, and at present it is the most primitive and intact natural protection area in China.

Tibetan antelope distributions are bigger than other animals

The natural environment here at is very harsh and the climate is of harsh quality with average annual temperatures ranging from -10.4 degrees Celsius to -4.1 degrees Celsius.

The Tibetan antelope is a representative animal type in this area and it is also a distinguished species.   From the point of view of numbers and distribution it is relatively more omnipresent than other animals. There are 31 mammal species, 60 bird species, 6 fish species and 1 reptile species within the park. Amongst these there are 7 species of animals that are class 1 protected animals nationwide and 17 animals that are class 2 protection types.

In the aspect of Tibetan antelope protection, the national natural protection Reserve management Bureau has 10 dedicated staff often go throughout the park braving harsh conditions to prevent the setup of traps, prevent poaching, and illegal mining in order to aid this trouble animal species. 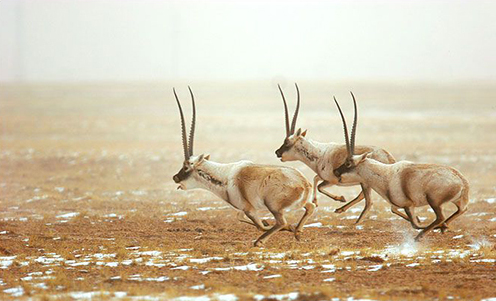 Incidences of poaching of the Tibetan antelopes are decreasing year to year.  In fact, after 2006 the area stop hearing the sound of gunshots from poachers signifying that the Tibetan antelope herd had finally received the help needed to ensure their sustained recovery.

According to statistics from numbers monitoring of Tibetan antelope in the reserve as well as in the nearby vicinity, their population has already reached more than 60,000.

Up until present, the natural preserve has not only in name but also in reality become an “animal kingdom”. Now the Tibetan Antelope amongst other animals is able to peacefully and leisurely engage in reproduction activities.

At any time along the Qinghai-Tibet highway, you can see the Tibetan antelope as well as other animals eating, playing and being active. It is one of the most beautiful sights that one can see along the road in this part of the world