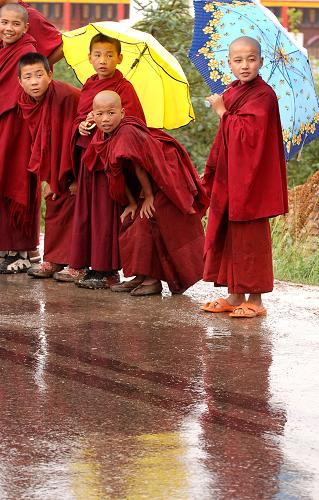 Nagpo was in a crimson robe, standing in the crowded audience waiting for the cyclers to pass by. He waved and cheered with a banner using one hand, and drew the prayer beads continuously with the other hand.

On July 21, the 15th Tour De Qinghai Lake entered the 5th section. The 48-year-old monk from the Druchen Monastery, Gulok Tibetan Autonomous Prefecture of NW China's Qinghai Province, took the oppurtunity to watch the cycle race while visiting a friend. Nagpo's robe was wet in the rain, but he was not bothered by it.

Nagpo spends most of his time in the monastery, he used to watch the race on TV, yet it's so spectacular to see when the cyclers ride through just in front of him at full speed."It reminds me of the days when I was on horseback as a young boy, so free." he said. 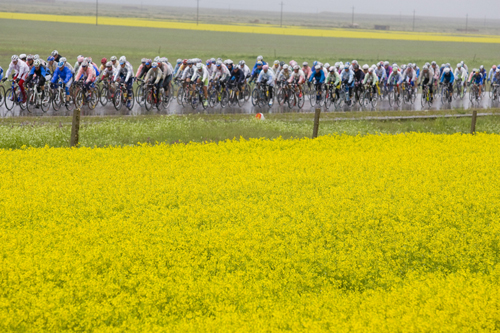 It was a rainy day and the temperature was 10 degrees Celsius, Nagpo said he prays for the cyclers' safety as the road had become slippery, and they were driving against the wind. “Driving in such weather is somehow like a special 'practice’ of experiencing pain as monks do.” Nagpo said.

Standing near Nagpo were Kelsang and Dawa from the Kangtsa Monastery in Qinghai, they arrived before 9 a.m., and waited for nearly 5 hours for the cycling team. “We are proud to see the bicycles passing by Gangcha, we believe it is fate that brings the cyclers to us, at the bank of the Qinghai Lake.” Kelsang said.

According to Kelsang, lots of monks are sports enthusiasts, besides meditation and chanting sutras, they do sports to keep fit.

Nowadays, many monasteries are equipped with fitness machines. In 2012, Qinghai Province launched the “Sports enter the monastery” activity, and donated fitness machines which are worth 132 million yuan to 619 monasteries, nunneries as well as 10 mosques in Qinghai, supported by the General Administration of Sports in China, the Finance Bureau of the Qinghai Province and other organizations, according to the director of the Sports Bureau of Qinghai. That project has been included in the monastic infrastructure and public service project by Qinghai Province.