LANZHOU, July 15 (Xinhua) -- A new species of Oligocene giant rhino has been confirmed living some 26.5 million years ago in the region of today's Qinghai-Tibet Plateau, providing insights into the evolution of the large land mammal and the plateau.

A Sino-U.S. joint research team has recently confirmed the Paraceratherium linxiaense (P. linxiaense) as a new Oligocene giant rhino species living in the Oligocene epoch, said Deng Tao, researcher of the Institute of Vertebrate Paleontology and Paleoanthropology (IVPP) under the Chinese Academy of Sciences.

P. linxiaense is named after its discovery site in the Linxia Basin in northwest China's Gansu Province, the northeastern side of the Qinghai-Tibet Plateau.

Researchers from the IVPP and Harvard University have also drafted a more detailed "family tree" and migration roadmap for giant rhino, based on the new findings from P. linxiaense, said Deng, also the leader of the study.

The study results have been published in the journal Communications Biology.

"It's worth noting that the Qinghai-Tibet Plateau likely hosted some areas with low elevation, possibly under 2,000 meters during Oligocene, and the lineage of giant rhinos could have dispersed freely along the eastern coast of the Tethys Ocean and perhaps through some lowlands of the region," said Deng.

Chinese researchers discovered a completely preserved 1.2-meter-long giant rhino skull with an articulated mandible and atlas in red and brownish yellow sandstone beds in May 2015.

The discovery then led to the following Sino-U.S. joint study, which confirmed the new species of Oligocene giant rhino.

The giant rhino has been considered one of the largest land mammals that ever lived. Its skull and legs are longer than all reported land mammals.

"Its body size was suitable for open woodlands under humid or arid climatic conditions," Deng said.

A giant rhino could weigh up to 24 tonnes, around the total of four African elephants. When standing, its shoulders and head reach five meters and seven meters high, respectively.

Except for some remains found in Eastern Europe, Anatolia, and Caucasus, giant rhinos lived mainly in Asia, especially in China, Mongolia, Kazakhstan, and Pakistan. All forms of the giant rhino, including six genera, have been recorded from northwest to southwest China through the middle Eocene to the late Oligocene.

Among them, only Paraceratherium bugtiense, known from the southwestern corner of the Qinghai-Tibet Plateau, has ample records, undoubtable taxa identity and is key to the origin and dispersal history of Paraceratherium, according to Deng. 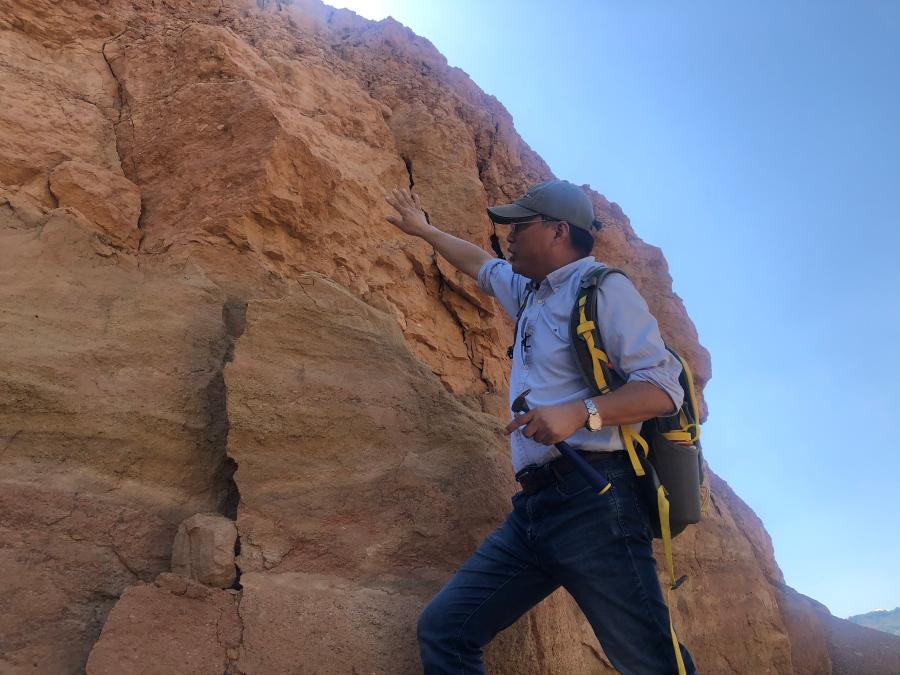 Deng Tao at the discovery site of fossils of Paraceratherium linxiaense in the Linxia Basin in northwest China's Gansu Province. (photo provided to Xinhua)

Besides helping to understand the ancient giant mammal, their study also sheds light on the evolution of the Qinghai-Tibet Plateau.

Previously, the academic circles recognized that the Qinghai-Tibet Plateau began to rise about 65 million years ago, and some scholars believed that it reached its current height about 40 million years ago.

"Our findings and study suggested the widespread occurrence of open woodland during the late Oligocene in northwestern China, with a mix of woodland and grassland," said Deng.

"The study tells us that the appearance of the Qinghai-Tibet Plateau in about 26.5 million years ago was far from what it is today. It used to home giant rhino in woodland and grassland," he added.