The head of China's top court has called for better judicial practices in ethnic areas to provide stronger support for regional economic and social development at a seminar in Northwest China's Gansu province. 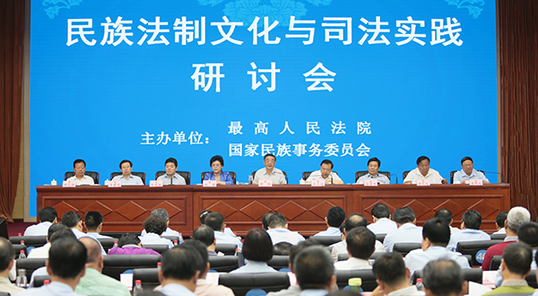 A seminar on legal culture and practices in ethnic areas held in Gansu province on Aug 24. [Photo by Sun Ruofeng/People's Court Daily]

Zhou Qiang, chief justice and president of China's Supreme People's Court (SPC) made the remarks when attending a workshop on legal culture and judicial practices in ethnic areas on Aug 24 in Quzhou county of Gannan Tibetan autonomous prefecture in Gansu province.

The seminar was co-hosted by the SPC and the State Ethics Affairs Commission.

Zhou said that wide research on that issue is one of the basic needs to fully implement the national strategy of rule of law.

"Courts at various levels in China should do more relevant research and promote the principle that justice serves the people," said the president.

Legal culture and judicial practice in ethnic areas, according to Zhou, is "a good reflection of the collective wisdom and life experience of people of all ethnic groups." Ethnic culture and character can find full expression in it.

Deepening research in such areas helps to boost understanding of and belief in the legal system with Chinese characteristics by ethnic groups, noted Zhou.

Zhou said that building a positive legal culture in ethnic areas can promote regional peace and stability, and thus contribute to national unity and stability in border areas.

"To advance the court's judicial processes in ethnic areas in this new era, we need the support of legal theory," said Zhou.

As people's awareness of legal rights and rule of law in ethnic areas improves, their expectation of procedural justice rises, remarked Zhou. A combined power -- from the local Party, the local National People's Congress, the local Chinese People's Political Consultative Conference, and the local government -- must be formed to achieve the goal.