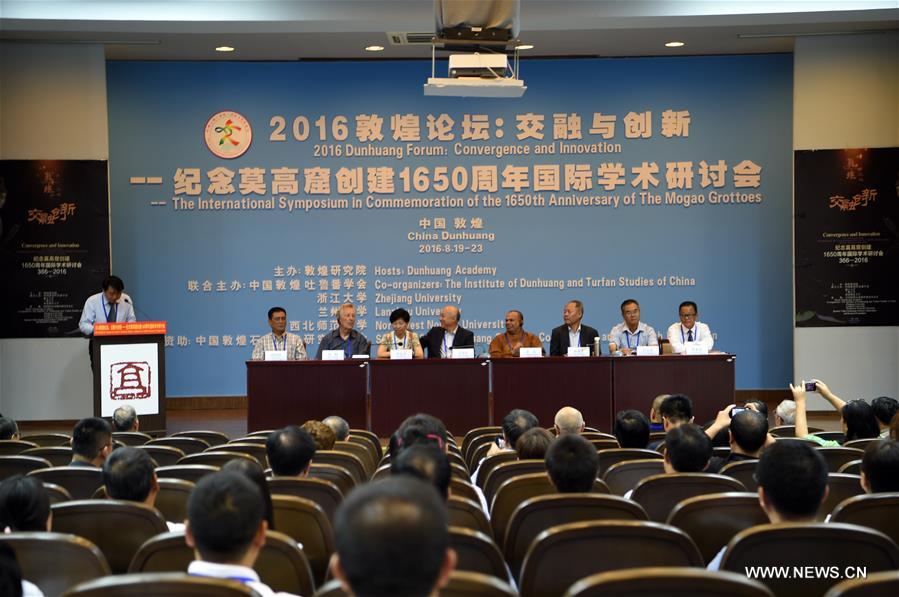 An international symposium in commemoration of the 1650th anniversary of the Mogao Grottoes is held in Dunhuang, northwest China's Gansu Province, Aug. 20, 2016. Over 150 experts and scholars attended the symposium Saturday. (Xinhua/Fan Peishen)

Over 150 scholars and researchers on Saturday attended a two-day seminar in northwest China's Dunhuang City to commemorate the 1650th anniversary of Mogao Grottoes in Dunhuang.

The attendees from more than 10 countries and regions including China, France, Germany, Japan and Iran will discuss archaeological findings, studies of Dunhuang documents, grotto art, and the role of Dunhuang in the history of Silk Road.

The Mogao Grottoes are home to a huge collection of Buddhist artworks -- more than 2,000 colored sculptures and 45,000 square meters of frescoes -- in 735 caves carved along a cliff by ancient worshippers.

The first cave was excavated by a monk called Master Yue Zun in A.D. 366. After over 1,000 years of construction, the Mogao Grottoes has become a Buddhist pilgrimage and was China's first UNESCO World Heritage Site, inscribed in 1987.

Dunhuang Academy as a guardian of Mogao Grottoes, will continue to explore its historical, artistic and scientific values, expand domestic and international cooperation, and preserve and develop world cultural diversity, said Wang Xudong, president of the academy.

Using its expertise and technology in preserving ancient frescoes, the academy has also been repairing frescoes in other parts of China, including Xinjiang and Tibet.

An accumulated 8,800 square meters of murals in landmark buildings in Tibet, including the Potala Palace, have been repaired over the past 14 years, according to the academy. ' The seminar is a part of the first Silk Road (Dunhuang) International Cultural Expo scheduled to open one month later.