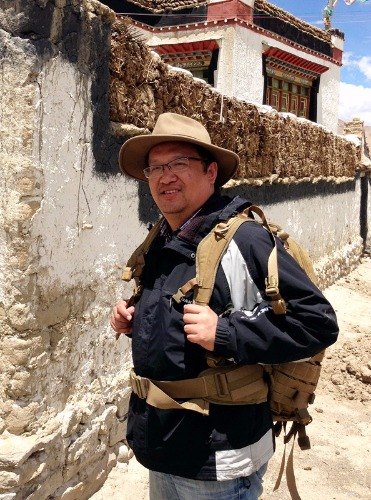 The scientific community was shocked by the death of eminent botanist Zhong Yang, a scholar who promoted the development of the Tibet autonomous region and a dedicated professor of biological science.

Zhong passed away in a car accident on Sept. 25 at the age of 53. On Dec. 9, he was posthumously recognized as an "outstanding communist" by the Standing Committee of Shanghai Committee of the Communist Party of China.

Zhong dedicated himself to frontier ecological research and education for 33 years, specializing in biodiversity on the Qinghai-Tibet Plateau, after graduating from the University of Science and Technology of China in 1984.

He saw the plateau as the most distinctive region for biodiversity research, a treasure trove of seeds on which a high value should be set. The area is home to more than 6,000 plant species, constituting 18 percent of the total nationwide, and more importantly, thousands of them are endemic to Tibet.

Recognizing this, Zhong organized a biological diversity research group to visit Tibet starting in 2001, one year after he became a professor of the life sciences school at Fudan University in Shanghai.

Some of the discoveries are monumental, such as the giant cypress that is unique to Tibet. Zhong and Zhaxi Ciren, his first Tibetan phytology doctoral student, discovered 30,000 giant cypress trees during their three-year investigation of the plant's distribution along the Yalu Tsangpo River in southeastern Tibet.

Zhong and two of his students, Xu Min and Zhao Ning, discovered a new type of Arabidopsis, a small flowering plant related to cabbage and mustard that has a high research value. He said it was a gift from Tibet and nature.

Working at high altitudes for long periods in Tibet and intense research work took their toll on Zhong who found it hard to control his weight and suffered from gout and high blood pressure. But he never complained. He accompanied his students on every field trip and endeavored to do more.

Besides scientific research, Zhong's contribution to cultivating expertise in Tibet is overwhelming. He launched the first masters program of ecology at Tibet University in 2011 and the first doctoral program in 2013.

In 2011, his research into plant genomes in the extreme environment of the Tibetan Plateau was the first project in Tibet funded by the National Natural Science Foundation of China.

In the same year, he established the university's first biological education team to collect rhododendrons, which have been found to reduce cancer cell growth.

Apart from on-campus teaching, Zhong worked to popularize science through the Shanghai Science and Technology Museum for 17 years, delivering public lectures and talking about biology to elementary and middle school students in Shanghai.

Zhong was always trying to find ways to explain biology in simple terms to inspire interest in children.