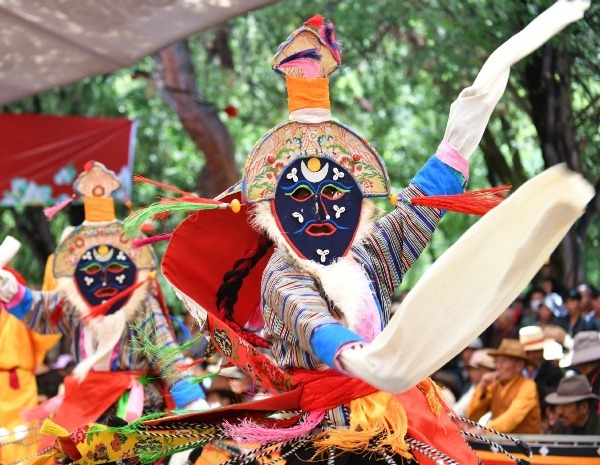 Every day, a sense of tranquility pervades Tibetan artisan Shilok's yard, as his apprentices are busy crafting opera masks and other workers are sewing costumes and clothes.

Stepping into his mask-crafting workshop, you can see a variety of masks carved as human, animal and deity faces, hung on walls or scattered over the ground.

Shilok, 46, was born in a poor family in Tashigang Village, Dagze District in suburban Lhasa. When he was a teenage boy, Shilok was sent to the city center of Lhasa to study traditional Tibetan opera mask-making to improve the family's livelihood.

Tibetan opera combines talking, singing, acting, dancing and literature, and has a history of over 600 years. It is regarded as a "living fossil" of Tibetan culture.

"Some apprentices quit, you know, to drive a taxi or open a shop, but I carried on out of pure love for the art. That's what brought me here," said Shilok.

In 2012, Shilok set up his small cooperative for Tibetan opera masks in Dagze District, which had only three workers and burdensome start-up costs.

"The local government and banks helped us out with some financial support. We managed to raise the money needed and get the cooperative started," he said.

Crafting a traditional mask is a time-consuming work, which has several procedures including sculpting, layering, air-drying and painting, and usually takes more than 10 days to finish, Shilok said.

With his passion and hard work, the cooperative has gradually turned into profit, which has received orders worth around 2 million yuan (280,000 U.S. dollars) this year.

"Most of our orders are from Tibetan opera troupes, including some big names in Lhasa," Shilok said. "And there are also many customers collecting them for decoration."

In recent years, the cooperative has expanded its business into more fields, such as sewing and making tents, Tibetan boots and performance costumes.

Now with two workshops and an exhibition hall, the cooperative provides a workplace for over 30 people, some of whom are from impoverished families.

Jamyang Tenzin, a 19-year-old worker, is from a low-income family in a nearby village. Now the skilled youngster is mainly in charge of operating an embroidery machine in the clothing workshop.

"This is a very nice job for me. Now I get a stable income of 3,000 yuan per month and valuable training opportunities to learn new skills," he said.

Shilok never forgets where he started. Since 2014, he has been donating 150,000 yuan to impoverished families in his home village each year.

"The cooperative is making profits now, but I never consider myself a businessman or a boss. I'm an artisan forever and I will pass down the skill to more people till I'm too old to make masks," said Shilok.