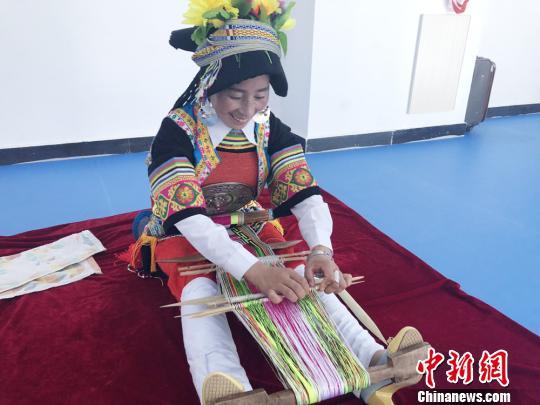 As one of the few brocade belt inheritors in Zhouqu County, Gannan Tibetan Autonomous Prefecture in Gansu Province, 36-year-old Jin Dongxiu spends her down time, after she has finished working on her farm and household duties, as “brocade time”. This skill, which has been passed down for more than a thousand years, is a “living fossil” of Qiang and Tibetan culture.

Brocade belts are flower belts worn by Tibetan women in Zhouqu County around their waists, to tie their boots, or to tie their hair. Colorful and with beautiful patterns, they can also be used as a token between young men and women to express their loyalty and love.

The brocade belt requires a lot of work, and folk artists are only able to weave a few inches each day. During the process, they sit and use their feet to hold the tools, then cross the colored threads back and forth to weave a traditional pattern. 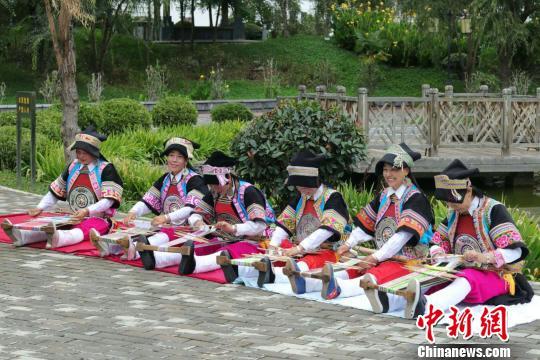 Women in Zhouqu County, Gannan Tibetan Autonomous Prefecture in Gansu Province are learning brocade belt weaving in their down time.

Jin Dongxiu inherited her brocade skills from the female elders in her family. Since a young age, she has been able to memorize a variety of complex brocade patterns. Today, there are over a thousand popular brocade patterns in Zhouqu County, and 15 to 38 patterns can usually be woven on a single brocade belt. The earliest patterns were simple, weaving images of ancient antelope, peacocks, tigers, leopards, deer, and cattle, with themes relating to deities, religious instruments, folk customs, animals, landscapes, and architecture.

“With the development of society and long-term cultural exchanges between different ethnic groups, the patterns, colors, materials, and specifications are more abundant, and there are more varied cultural elements such as ethnic script, heroes, and cartoon characters appearing on Tibetan brocade belts,” Jin Dongxiu said.

The local government has collected and compiled a large number of pictures, videos, texts, and objects relating to Tibetan women’s tapestry crafts in recent years and has vigorously carried out rescue and preservation efforts. Under official support, the inheritors, including Jin Dongxiu, have normalized the teaching of brocade, attracting more and more local women to join in. In addition, brocade has also been loved by tourists as a fine craft.