Archeologists in Tibet Autonomous Region believe the ninth century Purang stele to be the oldest in the region. 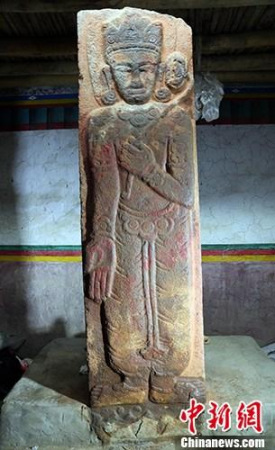 The stele is 1.85 meters tall, inscribed with the image of a standing buddha.

On its left side are 24 lines of old Tibetan language. On its right side are 19 lines of buddhist prayers.

Shargan Wangdue said most scholars agree that the stele was set up in 826 or 838, during the period of Tubo kingdom.

"This stele shows Buddhism was already being practiced during the Tubo period in western part of Ngari," Shargan Wangdue said.