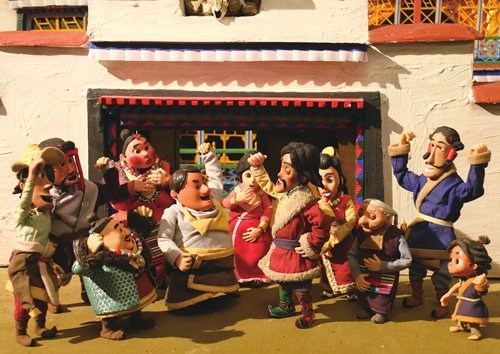 Well designed stop-motion figurines clad in Tibetan robes is probably not the first image that flashes into your mind when thinking of China's Tibetan ethnic group, but this may soon become the case for many after Tibetan animated TV series Akhu Tönpa hits small screens nationwide in China in 2018.

The 52-episode animated series is one of the first projects co-produced by the government-backed Film, TV and Animation Production Base in Southwest China's Tibet Autonomous Region and several Tibet-based production companies. The production team is now busily wrapping up the Putonghua (Standard Chinese) and Tibetan-language dubs for the series.

"It is among the first animated projects made solely by Tibetan companies," Lü Jinghui, the series' director and executive head, told the Global Times on Wednesday.

Focusing on the brave and witty legendary Tibetan figure Akhu Tönpa, or Uncle Tonpa, the show has been worked on by Tibetan and Han animators for the past five years. As a State-sponsored project, the show has been carefully handled by the team to make sure that the story is purely Tibetan from its visuals to the core values it portrays "rather than tell a non-Tibetan story using Tibetan elements just for show."

"This was specifically stated as our 'Rule No.1' when we were handed the project," Lü said.

While the Lhasa-based team is responsible for most of the first stage preparation such as the pre-production design and survey as well as all the late-stage work such as editing, dubbing and special effects, the Beijing-based team led by Lü handles the actual shooting. The pre-production survey alone, during which time Lü and his crew lived in Tibetan regions, took 18 months.

"Stories about Akhu Tönpa are very popular in Tibetan regions," Lü noted. Based on the several editions of folk legends that the team collected during the survey, Lü and his team decided to base the stories in just one Tibetan village instead of the many places featured in the original versions.

"It starts with Akhu Tönpa traveling to the village. During the time he stays there, he uses his wits to increase the villagers' quality of life," Lü said, adding that Akhu Tönpa's identity changes as the series progresses in order to better fits the legends that portray him as a Robin Hood-like serf, a servant, a Buddhist practitioner or a businessman.

Even though the stories were written by Han screenwriters, they were proofread and reviewed by Tibetan producers and cultural experts before each shoot, Lü told the Global Times. Aside from content, any Tibetan elements in the series such as the design of the characters' clothing and all the props and setting were meticulously examined by Tibetan experts.

Considering that the series will also be broadcast outside Tibetan-speaking areas, the Tibetan words used in the stories will be explained upon or changed in the Putonghua version to help audiences who are unfamiliar with the Tibetan culture better understand the stories, Lü explained.

The first things many Chinese today think of when talking about stop-motion are US studio Laika Entertainment's 2016 film Kubo and the Two Strings and the Shanghai Animation Film Studio's 1980 animated series The Story of Afanti.

"The Story of Afanti is indeed a masterpiece representing a generation of China's puppet animated works," Lü told the Global Times.

Still considered one of the Chinese mainland's most well-made and popular animated works, the 1980 classic features a bearded wise man, Afanti, who uses witty tricks to help punish scoundrels. The character is said to have been inspired by the Turkish folk figure Nasreddin, who also serves as an inspiration for the Akhu Tönpa team.

"Probably because characters in the two stories are similar in some ways… but our puppets are more sophisticated," he noted, saying that one of the reasons why they chose to film Akhu Tönpa with stop-motion technology is that they think puppet animation can more easily bring the audience into the world of the story.

Different from the clay figures used in stop-motion classics such as the 2000 US film Chicken Run, Lü said the puppets used in Akhu Tönpa consist of a metal skeleton base, a body made of plastic material and sponge as well as hundreds of changeable eyes, eye-brows and mouths produced using 3D printing technology.

"As for the puppet's skeleton, at first we thought about using models bought from overseas but later we found they didn't fit [size-wise], so we made our own even though that took us a lot of time," he said.

The past two decades have seen few stop-motion works produced in China, series' producer and executive screenwriter Wang Donglei noted, adding that this is what makes Akhu Tönpa even more special aside from its ethnic background.

"We just started doing stop-motion in recent years… and technically speaking, Akhu Tönpa is not as perfect as Kubo partly due to the fact that investment is different for movie and TV series production which leads directly to different levels of quality when it comes to visual effects…" Wang told the Global Times.

"Kubo is said to have spent an estimated $20 million to produce an 80-minute film, while we have to produce 500 minutes of footage within a budget of several million yuan (1 million yuan = $150,500)," she said. "We could produce works of higher quality if given more time and money."

Right now, the team is working on more Tibet-related stop-motion works including one in which the main character is a Tibetan antelope - the endangered species found in China's newly included UNESCO World Heritage Site Hoh Xil.