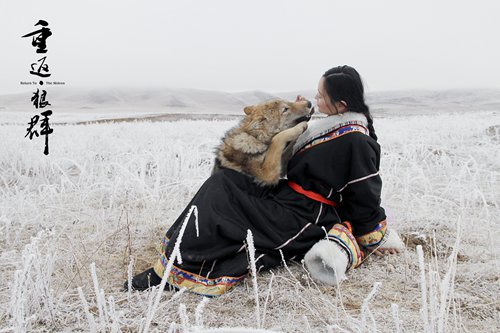 Wolves have a complex image in China. On one hand, many Chinese find them scary, which is why there are numerous stories about wolves harming people and other animals in traditional Chinese culture. On the other hand, Chinese also respect these animals because they are seen as being "courageous" and "tough."

According to the thesis paper Study on the Culture of the Wolf in China by Ma Jianzhang, Yang Guotao and Ma Yiqing, nomadic tribes in North China and Northwest China had great respect for wolves because they needed to fight against the harsh environment of the regions just like the tribes did. Fear of wolves was mainly prevalent in the central parts of China, since the farmers in these regions saw these animals as enemies that were a direct threat to their livestock.

"Chinese have a centuries-long wolf culture," Zhang Yiwu, a professor at Peking University, told the Global Times. "While people's impression of wolves was mainly negative in the past, after the publication of Wolf Totem and the film based on that book, people began seeing wolves in an increasingly positive light," Zhang noted.

Written by Chinese author Jiang Rong, Wolf Totem provided many Chinese a window into the lives of wolves by going into extreme detail about how they live and survive in the wild. The book was eventually adapted into a film by French director Jean-Jacques Annaud in 2015.

Now another film is changing people's perception of wolves.

On June 16, Return to the Wolves debuted in Chinese mainland cinemas. The documentary film follows Green, a young wolf raised in captivity that is eventually returned to the wild.

The film became the highest-earning Chinese film over its debut weekend, earning 11.69 million yuan ($1.7 million) at the box office.

Cut from more than 1,700 hours of home movie footage, Return to the Wolves tells the story of artist Li Weiyi and how she discovered an orphaned wolf cub, which she names Green after its jade-colored eyes.

First attempting to raise the cub as an ordinary pet, the artist and her friend Yifeng soon realize the cub must be returned to the wild. The two then spend the next 10 months preparing Green for its return to nature by teaching it how to fend for itself and helping it integrate with a new pack.

Li discovered Green during a trip to the Zoige Grassland in the Tibet Autonomous Region in the spring of 2010. Speaking to a local herdsman, he told her how over the previous few days two wolves had attacked his village's flock of sheep in order to get food for their cubs. With their livelihood threatened, the local villagers killed the adult wolves, leaving the young cubs to fend for themselves.

"After hearing the story, I wanted to find out what happened to the cubs. After three days of searching, I eventually found them in a cave, but only one was still alive," Li told the Global Times on Tuesday.

Though her friend Yifeng objected, Li made up her mind to bring the dying cub back home with her to Southwest China's Sichuan Province.

However, while her heart was in the right place, it soon became clear that urban life was no life for the young cub.

They brought the cub back to the grasslands of his birth, but also realized they couldn't just leave the cub to fend for itself.

Over the next eight months, both Li and Yifeng taught the growing cub how to hunt and fend for itself. Discovering a nearby wolf pack, the two also worked to get Green and them accustomed to each other. Eventually, one day they saw Green on a hunt with the pack, and they knew that he had finally found a home.

Li turned her experiences into a book that was published by Changjiang Literature and Art Publishing in 2012. Wanting to reach a larger audience, however, the two decided that they should bring Green's story to the big screen.

An amateur film director and editor, Yifeng spent six years and two months editing together all the home movies they made of their time with Green.

"Some people have criticized the film saying it doesn't count as a documentary because it contains too much of my personal feelings. Even those who like the story have also commented that it's too amateurish," Yifeng told the Global Times, explaining that he was learning on the fly as he edited the film.

"My original goal was to bring it into theaters so people could see Green's story. I welcome different opinions on how well I succeeded at that."

Although Yifeng objected to bringing Green to Sichuan, he said his perception of the animals were changed by his time spent with the wolf cub.

"Green made me reflect a lot. I feel I am inferior to him… he had a humanity that people today do not have any more. We humans really know so little about wolves," Yifeng said.

Li further explained that "in most people's minds today, wolves are animals that attack people. But this is not the case. This is the biggest misunderstand people have toward wolves."

Li said that after their nearly one year with Green, they spent another five or six years living near the wolf pack.

"The wild wolves lived peacefully with us and never hurt us," Li told the Global Times.

"They do have their wild side, but that does not equate to killing people or wanton aggressiveness," she explained, adding that when humans run into something stronger than themselves, it is they who tend to attack before they might get hurt.

"This is the aggressiveness of humans."

While a second book of stories about their time with Green was published by Changjiang Literature and Art Publishing in 2015, Yifeng said they do not have a plan to make a second film yet.

"Making a film is a complicated thing. First, we need to see how the first one fares. At the moment, the future isn't looking very bright," Yifeng said, adding that the second book touches more on personal feelings, which is something he doesn't want to pursue anymore as a filmmaker.

"Personally speaking, if the first one can succeed on its own in raising people's awareness, I'd rather just leave the second story alone."