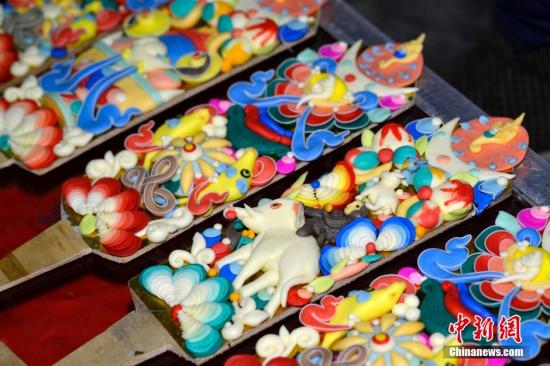 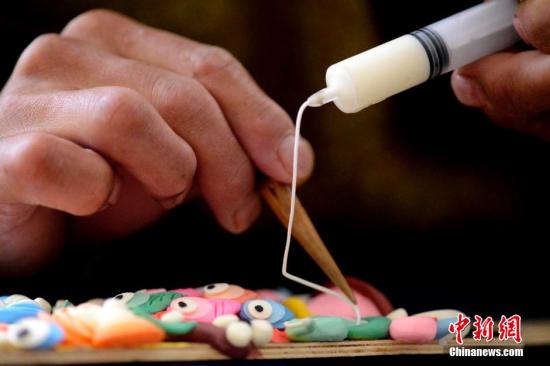 In the shady room of a monastery, a monk was absorbed in making pieces of colored butter into all kinds of Buddha statues, characters, animals and flowers as vivid as life with soaking his hand in a pot of ice-cold water from time to time when the weather is so cold outside that dropping water freezes.

Gatsang Gyatso, a 41-year-old Tibetan monk who entered into religion at the age of 18, has engaged in making butter sculptures for 28 years and has been in charge of the this work for his monastery for 15 years.

Every year, he has to finish his job before the 15th day of lunar January when a grand butter sculpture lantern fair would be held in all monasteries of the Gelug Sect of Tibetan Buddhism in Tibetan inhabited areas.

This year, Gatsang Gyatso finished his work on February 9(13th of lunar January) after over 40 days and nights’ work. As a branch of the Labrang Monastery in northwest China’s Gansu Province, Xicang Monastery reserves the traditional religious rituals that the works are maintained secrecy before the opening of the lantern fair.

Made from yak butter, a kind of Tibetan daily food, butter sculptures are made in different images, which are often combined together to tell Buddhism stories. With bright color, unique handcraft and beautiful shapes, it was included in China’s national-level Intangible Cultural Heritage List in 2006.

According to Gatsang Gyatso, the five butter sculptures just completed to greet the due festival cost more than 300 kilograms of fresh butter, including models of Living Buddha Jamyang the third, abbot of the Labrang Monastery, Milarepa, founder of the Kargyu Sect of Tibetan Buddhism, the Manjusri Bodhisattva, Master Tsongkhapa, founder of the Gelug Sect of Tibetan buddhism and the Saraswati Buddha as well as a Buddhism picture presenting luck.

“Each monastery’s sculptures are different, and most of them are made based on influential people and stories related to the monastery or other Tibetan inhabited areas nearby,” said Gatsang Gyatso.

“You have to cool hands in cold water from time to time, or the butter is too easy to melt and hard to get shaped,” he added.

About twenty years ago, it cost Gatsang Gyatso and his partners for nearly five months to prepare for the butter sculpture lantern fair while two months is enough now after years of exercises.

“He is also a famous Thangka painter who is good at sculpture measurement and matching colors,” said Gyahua Gyamtso, head of the monastery.

Though there are only one or two people out of over 300 monks in Xicang Monastery master the butter sculpture craft, Gatsang Gyatso does not worry for the handcraft’s inheritance.

“It is not only a unique Tibetan Buddhism art, but also a kind of Buddhism study. It will not fall into demise with time,” He said.