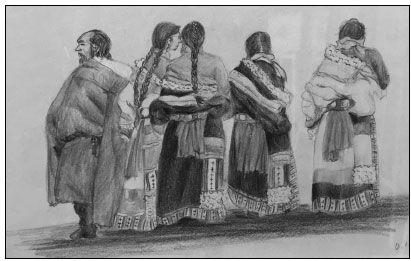 Nomad living on the grasslands is one of Dronkar Kyi’s favorite subjects.

A dream 12 years in the making has finally come true for Dronkar Kyi, who hosted an exhibition of her artwork in Lhasa, capital of the Tibet autonomous region, last month.

Born on the grasslands of Gannan Tibetan autonomous prefecture in Gansu province, the 24-year-old made a pilgrimage to Lhasa half a lifetime ago, where she was inspired by the oil paintings she saw on the wall of a Tibetan cafe.

She honed her skills with colored pencils and worked as an art teacher in her hometown until the opportunity arose for her to display her own artworks in the Tibetan capital this summer.

"I lost my soul in Lhasa 12 years ago, I have been seeking it ever since, and now I think I have found it again," she said, describing the city as her "inspiration".

Dronkar Kyi's exhibition, titled Hometown, was a five-day solo show featuring a series of 40 postcards and two other artworks. It was the first she had hosted.

Hidden away in an alley in the northern part of the city, the exhibition's location was not easy to find, but it drew many visitors.

It took her two years to complete the works on show, and she began preparing for the exhibition about 12 months ago.

She drew on the grasslands, nomads, monasteries, and yak tents of her homeland for her art.

"I chose to use grassland elements, because the grassland is where I was born, and cultural elements such as Tibetan robes and yak tents are the things I familiar with," she said.

Another of her desires was to capture the passing of time and "to record new changes on the grassland such as some Tibetan women wearing scarves and masks which Tibetan women did not wear decades ago", Dronkar Kyi said.

"Tibetan paintings usually remind people of thangka paintings, but fewer people know about colored-pencil paintings, and this is the probably why my work has drawn attention," Dronkar Kyi said.

"I want to improve my skills now by being an apprentice with others and I hope I can hold more exhibitions in the future."

"Congratulations to Dronkar Kyi on hosting her first art exhibition in Lhasa, her postcards have a strong ethnic flavor," said Pema Lhadron, a Tibetan writer who added that the artworks had immortalized "the love and the joy of grassland life".

"Our hospital plans to have some of Dronkar Ky's paintings on the walls in the near future, which we expect to help patients feel better and make them feel happy."