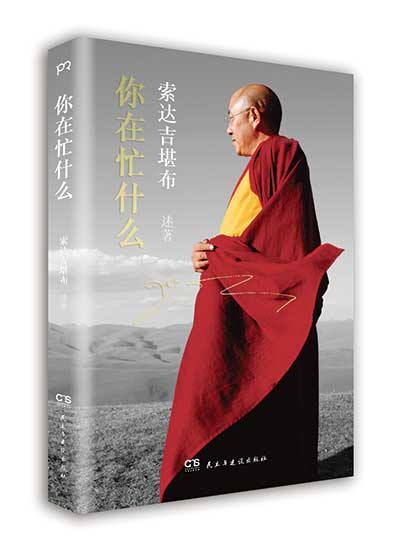 What Are You Busy With? by Sodargye.[Photo provided to China Daily]

It was already 8 pm on Jan 3 when Sodargye, a Tibetan Buddhist scholar, returned to his hotel from AsiaWorld-Expo in Hong Kong, where he had just finished two days of delivering dharma lectures to more than 11,000 people.

Dharma－cosmic law and order in Buddhism－is applied to the teachings of Buddha and is the form of spiritual education to which Sodargye has dedicated his life.

"Between 70 and 80 percent of the audience were Buddhists, with some from other religions, and some without a religion," the 52-year-old says in a low voice in heavily accented Mandarin. His left thumb moved slowly along his prayer beads throughout the interview.

Sodargye, from the mountainous Garze county in Southwest China's Sichuan province, has traveled the globe to talk about dharma. His first trip abroad was to the United States in 1993. Since then, he has been invited to talk all over the world, mainly to university students and faculties.

His speeches vary, but they always include some sort of spiritual education.

"The lack of a spiritual education has led to problems of unfairness and insecurity, and some solutions can be found in Buddhism. This is the theme of my talks," he says.

"Development of the spirit cannot match the pace of the growth of material life," he adds, saying that this is a common issue in many countries.

He recalls that he was once asked for his views on terrorism and responded that he supports Islam.

"I've studied Islam, and its doctrine does not bring any harm to the world," Sodargye says. "It has been manipulated by some people in the name of religion."

In 2015, he visited Namibia, South Africa and Lesotho, where he offered advice to young people on how to face hardship with the right attitude. He visited orphanages and saw famine up close.

He recalls how he was told that the average life expectancy in Namibia is just 37 to 42 because of HIV and malaria. A lack of jobs for young people, including university graduates, is also a problem.

"The feeling is that local people have little hope for the future," he says. "So the theme of my lecture was never lose confidence ... The locals are actually very intelligent and energetic. It's worth considering how to boost their potential." Sodargye has won a huge number of fans through his books and lectures about Tibetan Buddhism.[Photo provided to China Daily]

A former cowherd, Sodargye had little formal education until the age of 16, when he entered elementary school. He then studied in secondary school and a normal college, both locally.

Later, he was faced with a choice－to work as a teacher in his hometown or a vastly different life of studying Buddhism.

He says he had a strong interest in the religion from a young age.

When he was 23, Sodargye went to study at the Larung Gar Buddhist Institute in Sichuan and became a student of its founder, Jigme Phuntsok, who is considered an influential Tibetan Buddhist master.

Through learning, debating and writing, Sodargye soon became a khenpo, the title given to senior Buddhist monks with high discipline.

Having traveled across the world, Sodargye says acceptance of Tibetan Buddhism has been growing rapidly in recent years, especially among younger generations and intellectuals. His lecture at the University of Cambridge in the United Kingdom in late 2015 was attended by dozens of faculty members, fellows and students.

He points out that many people in overseas universities and colleges are familiar with Tibetan Buddhism, including some of the religion's terminologies.

"Some even do very deep research on the theories of Tibetan Buddhism and have raised very thoughtful questions. I was amazed, feeling they are on the same level with monks in my temple (in Sichuan)."

Sodargye says many in the West find it meaningful to study Tibetan Buddhism, as it is a relatively logical religion that can help people train their spirit to reach inner peace.

Giving lectures is not the only way Sodargye popularizes his religion.

He has written several books on Buddhist philosophy in Chinese and is active on the Internet.

He has a website in English where he explains Buddhist philosophy in simple terms, while his blog on Sina Weibo, the Chinese equivalent of Twitter, has more than 2 million followers.

Speaking about the future, Sodargye aims to spend the rest of his life teaching Buddhism to young people.

"I feel that human beings need spiritual training badly," he says, adding that he hopes more people born in the 1990s and 2000s become "truly intelligent people" through systematic training.