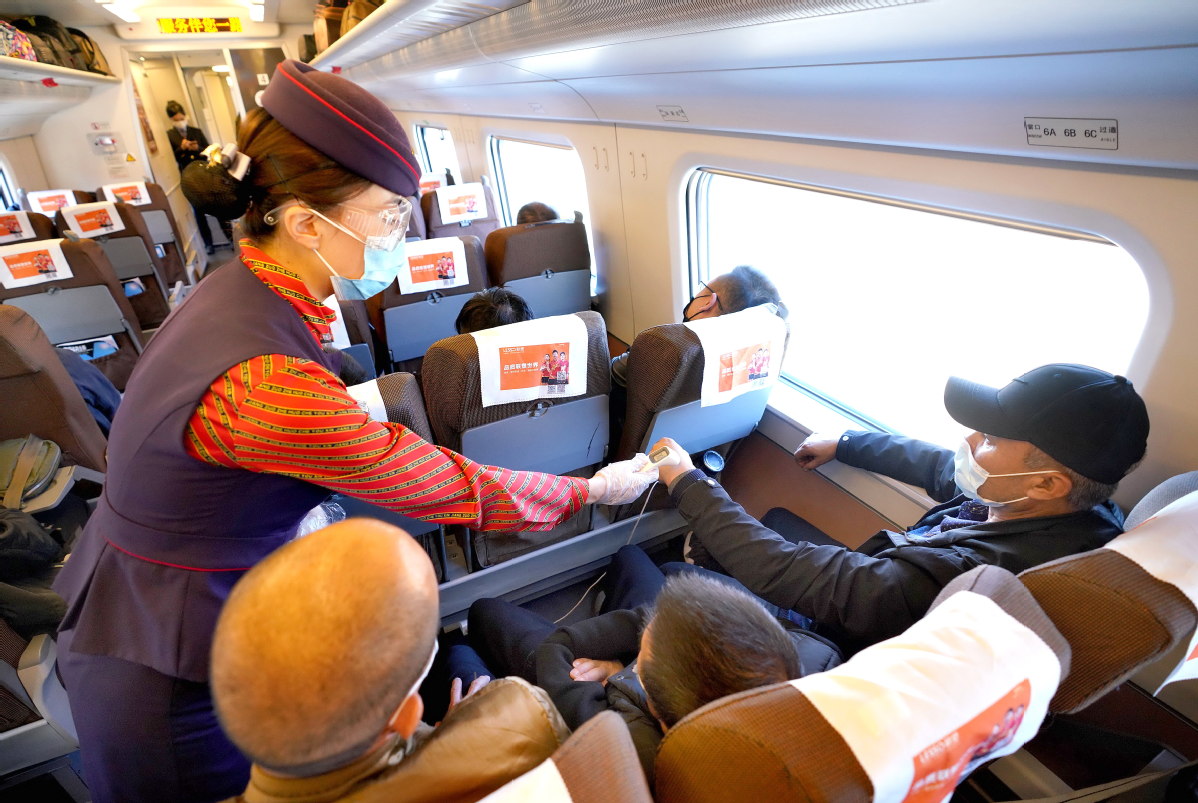 A train attendant checks the temperatures for a passenger on the first high-speed train from Urumqi, Xinjiang Uygur autonomous region, to Xi'an, Shaanxi province, on Sunday. It is the second high-speed train route out of Xinjiang and the first one beyond Lanzhou since the Lanzhou-Xinjiang High-speed Railway was put into operation in 2014. [ZHANG WANDE/FOR CHINA DAILY]

Under the new plan, more trains have been put into service than in the previous quarter, with 9,800 passenger trains and 20,163 cargo trains to operate on the country's vast railway network, China State Railway Group said on Saturday.

Among the newly added passenger train services is the Quzhou-Ningde railway, linking Quzhou, Zhejiang province, and Ningde, Fujian province. The opening of the line connects eight cities and counties in the two eastern provinces with the rest of the country via rail for the first time, it said.

The 379-kilometer railway will operate seven pairs of trains a day running at 160 kilometers per hour, the company said, adding that more passenger train services will be added in the two provinces to bolster regional transport capacity.

One pair of trains represents a same-day return service.

The line linking Lanzhou, Gansu province, with Xining, Qinghai province, on the Lanzhou-Xinjiang High Speed Railway will also see increased service, with 24.5 pairs of high-speed trains operating each day this quarter, facilitating the construction of the Lanzhou-Xining city cluster.

The company will allow more freight trains to operate on weekends, enabling the operation of an additional 42 pairs of trains compared with last quarter.

As one of the world's longest heavy-load railways for coal transportation, the Haoji Railway, which starts in Haolebaoji in Ordos, Inner Mongolia autonomous region, and ends in Ji'an, Jiangxi province, will operate 14 pairs of coal transportation trains a day this quarter, the company said.