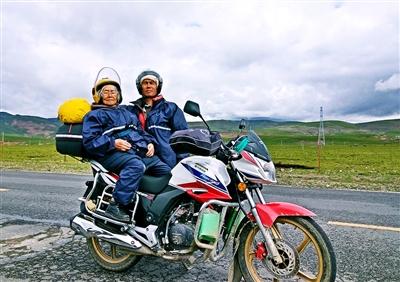 Song Jianhui and his 84-year-old mother ride a motorcycle on the way to Tibet. (Photo/Chengdu Business Daily)

Song Jianhui, 54, and his 84-year-old mother arrived safely at their home in southwest China's Sichuan Province on July 1, after making a trip to Tibet on a motorcycle, the Chengdu Business Daily reports.

They spent 17 days traveling a total of 5,000 kilometers.

Song, a resident of Leshan city, loves outdoor sports, and is especially good at swimming and motorcycling.

One day in early June, Song asked his mother if there was a place she wanted to visit most. She answered immediately: "Tibet!"

The senior has traveled extensively, and Tibet had been her lifelong dream. Song said going to Tibet by motorcycle was also his wish. "It'd be too late if we didn't go for it right away."

After making necessary preparations, they set out on June 16 and arrived in Lhasa on the afternoon of June 21. "Mum was very happy and excited upon stepping on this pure land of Tibet," said Song.

During their two-day stay in Lhasa, they visited famous sites such as the Jokhang Temple and the Potala Palace.

On the morning of June 23, they left Tibet for home. In order to enjoy different scenery, they chose a different route.

84-year-old woman takes a ride on a motorcycle to Tibet. (Photo/Chengdu Business Daily)

Commenting on Tibet, the mother said: "It was beautiful! Beautiful scenery, with good air quality, too!"

For safety concerns, Song said his mother had taken medicine to prevent possible altitude sickness before the trip, and that they would have retreated if she showed any sign of it.

However, at an altitude of 5,130 meters, "I had no reaction (to the high altitude) at all," said the mother. She had even asked her son, "Is this the highest mountain along the way to Tibet, with such a small height? It's simply a wet blanket!"

On their previous motorcycle trips, she was always as excited as a child, said Song. "What else would make me happier than seeing my mother so happy?"

"I love to travel everywhere on a motorcycle," said the mother. Next, she wanted to visit Northeast China.