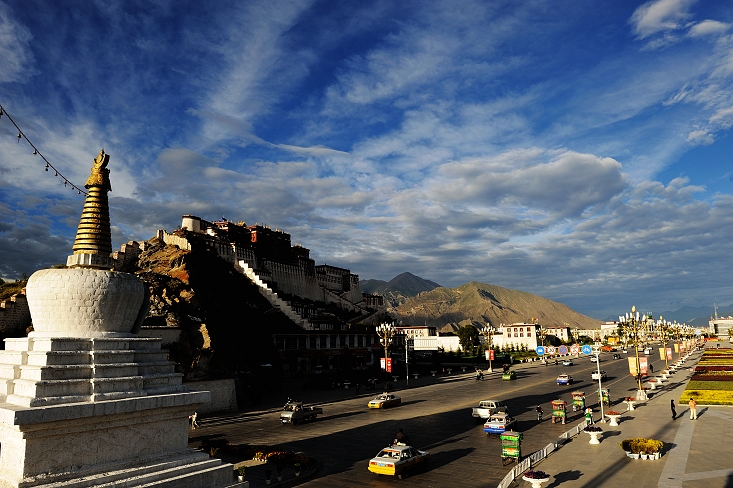 According to statistics, from October 1st to 7th, the Tibet Autonomous Region received 1,03 million tourists reaching a year-on-year growth rate of 18%. Amongst which, the number of tourists who stayed overnight account for over 410,000, the number of one-day touring tourists numbered to 620,000, which realized a total tourist income of almost 500 million RMB. These three numbers all reached a year-on-year growth rate of about 20%, according to Wang Songping, deputy director of the Commission of Tourism Development of Tibet, on October 8th .

Different tourism projects from various places in Tibet were given birth one after another, which has also become the highlight during the National Day Holiday.

On October 1st, the Lulang International Tourism Town in Nyingchi started to run a business, a large number of tourists checking-in the five-star hotels helped allow the tourism town have a new look with high-end tourism service; on October 3rd, the 2nd Tibet Outdoor Sports Meeting was opened in Yangbajing. Activities such as trekking to Mount Xuegula, cross-country biking competition and skiing competitions at Mount Luodui all attracted outdoor sports lovers from different places.

In recent years, the tourism index in Tibet indicates the rapidly growing trend. Take Lhasa for example, according to Lhasa’s official news report, from October 1st to 8th, the city received over 10 million tourists which reached year-on-year growth rate of 16.4%, therein realizing the tourism income numbering to 13.8 billion RMB which reached a year-on-year growth rate of 22.78%. It was pointed out in the report that, since March 2016 there has been a large number of tourists entering Tibet, especially during July and August of this year, all scenic spots in Lhasa were filled with people; all tourism companies received a big amount of tourist groups which has been increasing rapidly; high star-level hotels and inns also have received a large number of tourists which was bigger than that of last year.

Along with developing tourism, Tibet has put a lot of effort in preserving culture. Qi Zhla, the standing committee of the Tibet Autonomous Region and party secretary of Lhasa on the 3rd Tibetan International Expo held in September indicated that Tibetan culture is an organic component of the Chinese culture.

In recent years, the government has put a lot of financial effort as well as physical and human resources into preserving the Tibetan culture, therein the Tibetan language has been well protected and widely used; the cultural relics have been well restored and protected; the rights of practicing freely religious belief of the peoples have been respected; intangible cultural heritage has been well preserved and has exhibited a positive development trend. At the moment, Tibetan culture is entering a golden age in history, reflecting new characteristics and prospects.