Sometimes known in Tibet as “singing bowls”, Tibetan music bowls are a type of ancient bell used to focus and balance the mind during meditation. However, instead of being hung from a rope and struck with a hammer, the Tibetan music bowls use a very different method of making their enchanting ringing sounds. The bowls have been used in meditation in Tibetan Buddhism for centuries, and as well as being used for meditation, they are also an integral method of learning the Buddhist teachings for the young monks.

Singing bowls produce sounds that are designed to invoke a state of deep relaxation in the mind and body. This is meant to assist practitioners of Buddhism to naturally enter a state of meditation, with the ultimate goal of their use being to aid in bringing one to enlightenment. These enchanting musical bowls can be found on alters and in Buddhist temples throughout Asia, and in monasteries and meditation halls across the globe. Playing the bowls can cause an immediate centering effect on the mind of the practitioner, and are believed to help balance the left and right brains to become synchronized. In Tibetan Buddhism, it is known that meditation on the subtle ringing of the bowls can help to tune one in to the sounds of the universe, both inside and out. 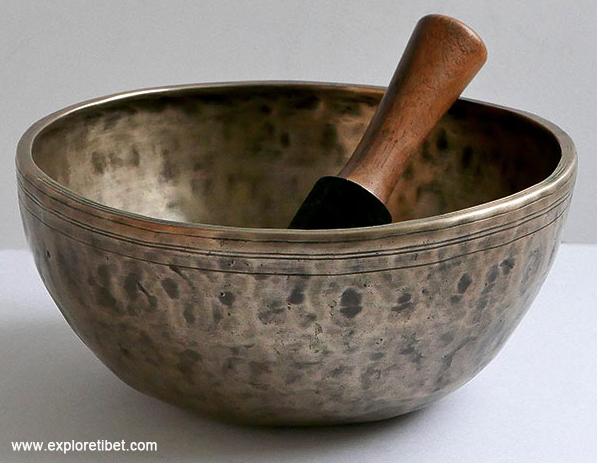 The Origin of the Singing Bowls

No-one knows exactly where these charming bowls originated, and many debates have stood over their exact origins. Bowls of the same materials are said to have also come out of Ancient Mesopotamia, and similar bowls with the same metal make-up have been unearthed in Persia, in the area of Iraq. The samples from Iraq have been dated back as far as 3,000 BC, but it is believed they actually date back further than that. Which leaves the origins of these musical bowls lost in the mists of time.

What is known is that the bowls were brought to Tibet by the Indian sage, Padmasambhava, in around 800AD, and that the bowls could not have originated in Tibet or India, since the metals used in making the bowls are not all local to the plateau and the Indian subcontinent. The owls have been made in India since around 500 BC, and Nepali artisans have been making them in the Kathmandu Valley for more than a thousand years. Many of the bowls that you can see in Tibet’s monasteries today originated in Nepal, where they were crafted for the monks and lamas of Tibet.

In Tibet, the bowls are linked to Tibetan Buddhism since its restoration in the region in the 8th century. No evidence has been found to show that the singing bowls were used prior to the appearance of Guru Rinpoche (Padmasambhava) in Tibet in the 8th century, and they are not known to be a part of the animistic Bon religion that preceded Buddhism in Tibet. 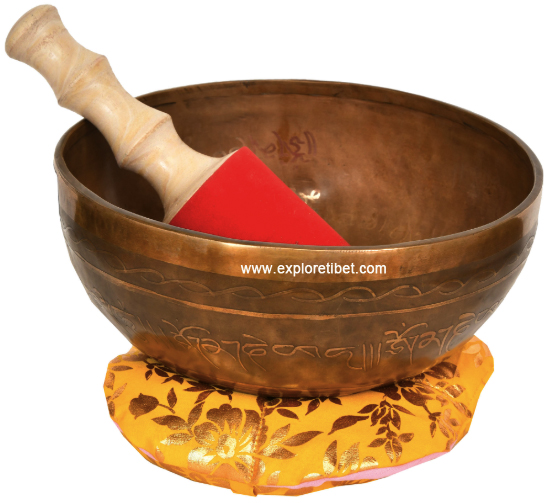 The Making of the Singing Bowls

The Singing Bowls of Tibet have been made in the same way since they were first introduced to the Himalayas more than 1,200 years ago. However, this unique art form has been all-but lost due to the modern technology of blending metals and turning bowls by machines. There are only a handful of traditional bowl-makers left in the Himalayas now, who can still produce bowls with the tones and quality of sound that the manufactured bowls lack.

While modern bowls are often made of “bell metal”, a bronze alloy made from exact proportions of copper and tin, the traditional bowls were made from an alloy made up of seven different metal ores. This unique metal includes tin and copper, to make the bronze, as well as gold, silver, mercury, lead, and meteorite iron, in various quantities. Known as “sky metal” or “thogcha” in Tibet, iron from meteorites was highly prized for the purity of the iron in the ore, since the impurities found in earthly iron ore were burned off as the meteor entered the atmosphere.

It is widely believed that it was the quality and composition of the bowls that gave them their unique resonating sounds. Antique bowls are actually highly sought after in the global market, for their age, design, and sound quality. The bowls also come in s number of different forms, and each type has a unique tone to it. The variety of bowl types include:

Jambati Bowls – often with visible hammer marks, these bowls are ore dish shaped and shallower than most other singing bowls.

Thadobati Bowls – defined by their flat bases and vertical sides, these bowls have an even rim that produces just a single note. 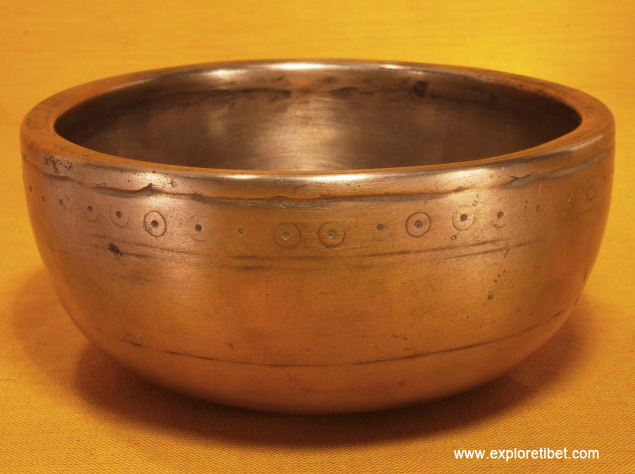 Remuna Bowls – Similar to Thadobati bowls in shape and the timbre, the sound is more uneven, due to the walls being thicker than the rim. 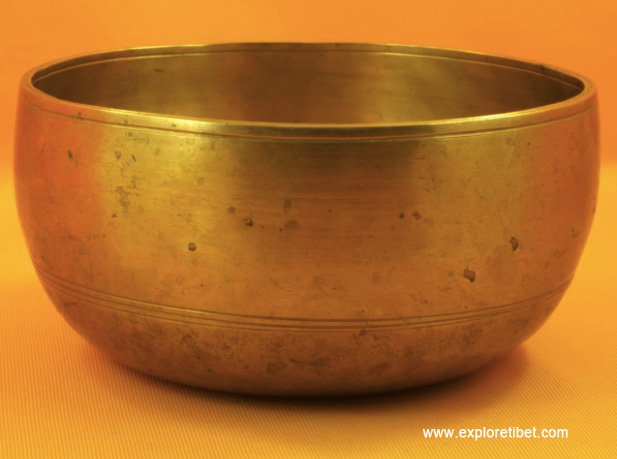 Manipuri Bowls – Similar in shape to Jambati Bowls, the Manipuri Bowls are deemed to be one of the first singing bowls in the Himalayas, from the northeast of India, in the state of the same name. Manipuri was once the center for metal production in India.

Mudra Bowls – Also characterized by their flat bases, Mudra bowls have thick walls and narrow rims, but are renowned for their immense size.

Lingham Bowls – An unusual and unique singing bowl, the Lingham Bowl is known for the protrusion that stands up in the center of the bowl, as well as for the intricate and extensive etchings around the sides and rim, both inside and out.

Pedestal Bowls – Another uniqueness of the different types of bowls, the pedestal bowls are set on a small stand as part of the design, keeping the base off the ground for a purer sound.

While these are the main styles of bowls, there are some you may find that are unlike anything listed. These are usually personal singing bowls that were commissioned for dignitaries, nobles, and high officials in Tibetan Buddhism, to set them apart from the rest of the people and monks.

How to Play Tibetan Singing Bowls

The sound of the bowls is one that is unique anywhere in the world, and is made by running a stick around the inside or outside of the rim. Known as a “puja”, the thick hammer-like instrument is run gently along the rim of the bowl, making the entire bowl resonate with the vibrations caused by friction between puja and bowl. The sound of the resonance can be changed by increasing or decreasing the speed with which one runs the puja around the rim, as well as by using the inside or outside of the rim.

The bowls are traditionally used in Buddhist meditation, in both monasteries and homes. As well as being an aid to meditation and finding your balance and center, the ringing of the bowls is also often used to signify the start and finish of a meditation session for the monks. Many Buddhists also believe that, when you play the bowl while reciting the Buddhist mantras, the chanting is released into the universe and aids in the journey towards enlightenment.

To know more about Tibetan Buddhism or want to join a Spiritual Tour in Tibet, then visit our website www.exploretibet.com and we provide in-depth Tibet tours lead by experienced local Tibetan tour guides.