May 3, also the 18th day of the fourth lunar month in Chinese calendar, has been designated as birthday of the Shakyamuni Buddha in Chinese Buddhism. On this day, Buddhists from all over China celebrate the “Buddha Bathing Festival”to commemorate the Buddha birthday. The Abbot of Yonghegong Monastery pays respect to the Buddha.

On the same day, the Chinese Buddhist Association celebrated the birth of the Buddha in the Beijing Lingguanbg Temple, the place where the tooth relic was donated. More than 1000 Buddhist devotees and guests gathered to celebrate the Buddha's birthday. Abbot Hu Xuefeng Lama, Pasong Lielong Zhuangmeng Presbyter and Master Yan Jue respectively led Tibetan monks, Southern Buddhism monks and Chinese Buddhism monks to pay their respect by chanting sutras, and praying for prosperity and world peace. 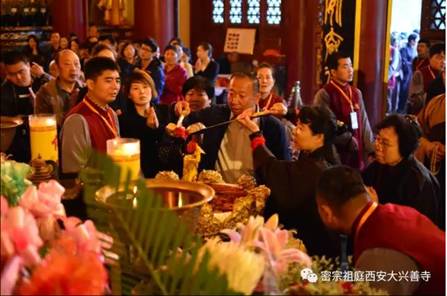 Believers are bathing the statue of the Shakyamuni Buddha.

Mrs. Su, a diplomat from Myanmar, said that as a Southern Buddhism devotee, it was very special to be able to celebrate the Buddha's birthday at the tooth relic. In recent years, there have been numerous Buddhist exchanges between China and Myanmar, and the Buddha tooth relic has been exhibited in Myanmar four times. For a country like Myanmar, where almost everyone believes in Buddhism, holding this kind of Buddhist events can help promote amicable exchanges between the two countries and improve sentiment between believers.

Afterwards, Buddha bathing ceremony was held. Believers scooped up the pure water, which symbolizes wisdom and mercy, and bathed the statue of Shakyamuni Buddha, while praying for good fortune.

Apart from Beijing, the ancient Buddhist temple in Xi'an also celebrated the Buddha Bathing Festival. At 9:00am in the Great Buddha's Hall of Xi'an's Daxing Shan Temple, monks and civilians scooped water out of the bowl with a golden spoon and bathed the Buddha in turns. They worship so sincerely that they felt like it was to cleanse their body and mind.

In the Foguang Temple in Taiwan, festivities were also held to celebrate the Buddha's birthday on the 50th anniversary of the building of the temple. The temple held a number of events, such as the releasing activities, the Buddha Music Festival, and Hiking, attracting Buddhists from around the world to come and pray.