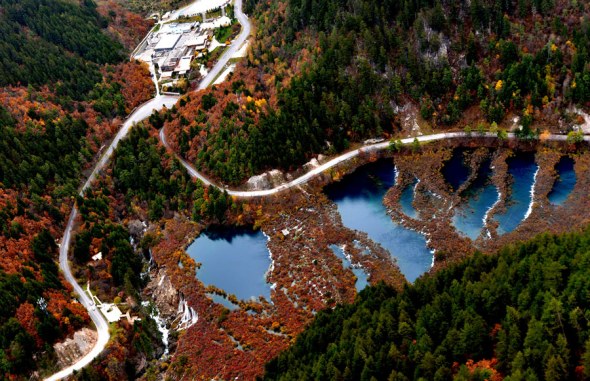 The Nuorilang Waterfalls in the Jiuzhaigou scenic area, as pictured in November, partly collapsed (as marked in the circle) after the earthquake in August. （Photo: For China Daily/Hua Xiaofeng）

Jiuzhaigou, a scenic area in Sichuan province on the UNESCO World Natural Heritage list, will gradually reopen this year after efforts to fix the damage caused by the magnitude 7 earthquake on Aug 8.

Admission fees will be lowered to attract visitors, according to Liu Zuoming, Party chief of the Aba Tibetan and Qiang autonomous prefecture.

He was speaking at a recent meeting in Chengdu, the provincial capital, to discuss how to bring the prefecture's tourism sector out of the shadow of the quake.

Jiuzhaigou, which literally means "nine-settlement valley", is named for the nine Tibetan settlements in the mountain valley in Aba on the eastern edge of the Qinghai-Tibet Plateau. Visitors are drawn by its 108 transparent Alpine lakes and Tibetan and Qiang culture.

Twenty-five people died in the quake on Aug 8, and 493 others were injured. Jiuzhaigou's scenic wonders also fell victim to the disaster.

Two days after the temblor, the Nuorilang Waterfalls collapsed. Nuorilang, which stood 24.5 meters tall, was China's widest waterfall at 270 meters and had been chosen by netizens as one of the country's most spectacular sights.

Jiuzhaigou has been closed since the quake.

Post-quake reconstruction will be completed by 2020, but some sights will reopen earlier, including Changhai Lake this year and Wuhua Lake in 2019.

Changhai, 3,100 meters above sea level, offers a unique perspective. The eye is irresistibly drawn across its calm, blue expanse to the snow-flecked peaks marking the limit of one's view, and then back again to the dark triangular reflections of the nearer hills.

Before the earthquake, Jiuzhaigou's admission fee was 220 yuan ($35) during the peak season, April 1 to Nov 15, and 80 yuan during the offseason, Nov 16 to March 31. A new admission fee is being formulated for the reopening of some sights, according to the Aba government.

The Sichuan government unveiled its 11.8 billion yuan reconstruction plan for Jiuzhaigou in November.