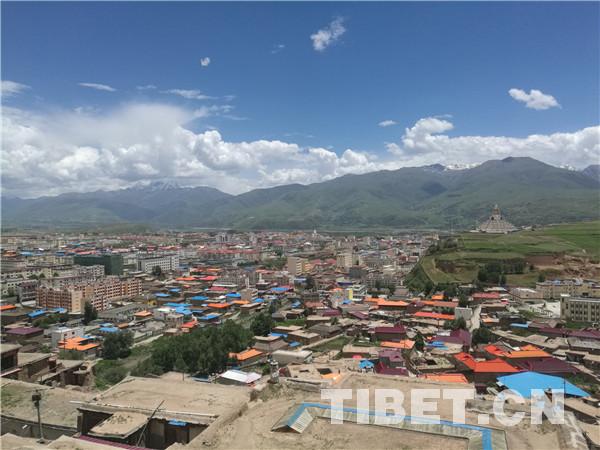 The present Garze County is still a large city on the Kham plateau. Although the registered population is only around 25,000, the actual population is more than 60,000 including migrants. People from the surrounding counties prefer to come to Garze to buy houses, work, or send their kids to school.

According to friends in the county, Garze is now speeding up its urban construction not only with government support, but also other economic channels, especially leveraging folk capital. They confidently say that in another five or 10 years, the scale of Garze County will surpass that of Kangding and Yushu, becoming the largest city in the region.
Standing on the terrace in front of the main hall of Garze Monastery in the northwest of the city, the 60-year-old khenpo (monastery abbot) introduced the old Garze and new Garze to us. Overlooking the county, as well as the large geographical developmental space, we are also confident in the future of Garze.

Garze is also called the "granary of Northern Kham" The Yarlung  River comes out of the high alpine canyon from Dege, forming a valley more than 50 kilometers wide. The climate is mild and soil is fertile here with a long history of agricultural cultivation. Garze town once had two major local headmen, who occupied the most fertile land on both sides of the Yarlung River. According to historical records, the area of Garze is less than a third of Daofu County in the prefecture, but grain tax is four times that of Daofu’s. In recent decades, Garze has continued to produce high-quality highland barley and peas.

In early July, as we walk in the Yarlung River valley, the gorgeous scenery affords us views of the lush greenery, golden rape fields, and purple alfalfa flowers. In Sershidi Township south of the river, we see rolls of highland barley and thick pea branches, images of a bumper harvest.