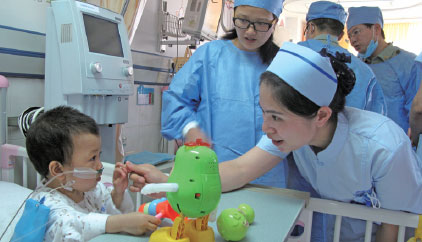 A nurse talks with a child of the Qiong ethnic group, who just had a surgical operation for congenital heart disease, at the Chengdu Military General Hospital. Huang Zhiling / China Daily

When Tenzin Rigsang frolics with his friends outside his family home in the Tibet autonomous region, he looks no different from any of his playmates.

Yet the 3-year-old resident of Dianchong village, Lhunzhub county, was diagnosed with congenital heart disease when he was less than 4 months old.

"It was a heavy blow to the family," recalled his mother Chodron Tsomo, who grows highland barley and wheat to supplement her migrant worker husband's salary of less than 2,000 yuan ($300) a month.

"We were desperate as doctors in the county hospital said they could not perform a surgical operation on our son and asked us to take him to seek treatment in a major city. We had no money and did not know what to do."

To make matters worse, the family had been informed that 70 to 75 percent of children with Tenzin's heart condition die before they turn 10.

Then, when he was 6 months old, the county hospital told Chodron that surgeons from the Chengdu Military General Hospital in Sichuan province could carry out the surgery for free.

Five months later, her son had a successful operation and has been healthy ever since, she said.

Tenzin is one of more than 1,500 children with congenital heart disease to have been treated at Chengdu Military General Hospital since 2009, when it began offering free treatment for children from poor areas inhabited by ethnic minorities.

On average, eight out of every 1,000 Chinese children have congenital heart disease. Most live in poor, mountainous areas.

"Every 1,000 meters above sea level, the incidence of congenital heart disease among children rises by one in 1,000, on average," said Zhang Jinbao, chief of Chengdu Military General Hospital's cardiovascular surgery department.

Zhang, an expert in congenital heart disease, joined the hospital from a military university in Xi'an, Shaanxi province in January 2009. He immediately began to focus on treating the disease.

"Since then, they have traveled more than 200,000 kilometers to more than 40 cities and counties in Sichuan and Yunnan provinces and Tibet to find children of the Tibetan, Yi and Qiang minorities who suffer from congenital heart disease," said Tang Dengcai, chief of the hospital's political department.

In March 2010, a team from the hospital was almost hit by a falling boulder while driving along an icy mountain road in Sichuan's Xiaojin county, Aba Tibetan and Qiang autonomous prefecture.

"They managed to arrive at their destination 23 hours later to check whether about 30 Tibetan children were suffering from congenital heart disease," Tang said.

In May 2013, the hospital's surgeons endured altitude sickness while crossing the Dongda Mountains in Tibet's Markam county at more than 5,000 meters above sea level to test a child for the disease.

The medics' efforts have inspired two charity foundations in Beijing to pay the children's treatment fees, which can range from 30,000 yuan to 100,000 yuan.

Nearly all the more than 1,500 patients, who have undergone treatment at the hospital, now lead normal lives, Zhang said.