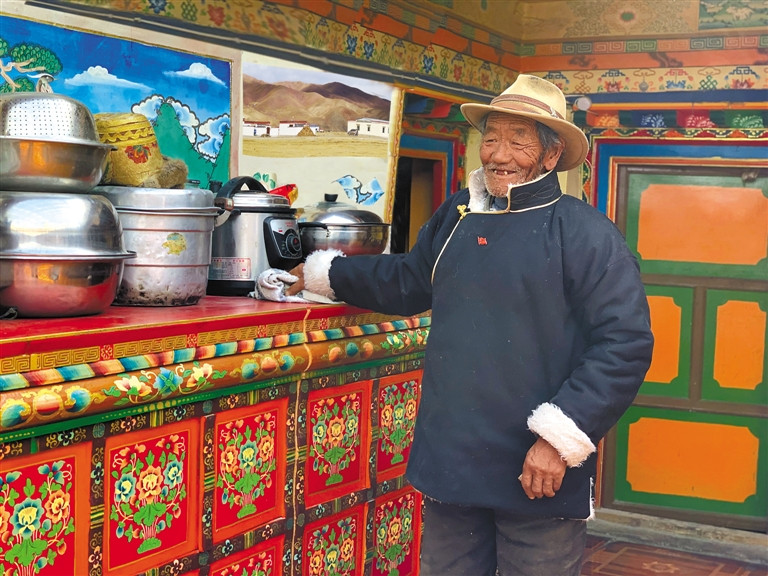 Phentok, male, born in 1939, currently 80 years old, lives in Ya'ou Village in Changlung Township, Gampa County, southwest China's Tibet. Before Tibet's democratic reform in 1959, Phentok and his family were all slaves to the Kamkam Chikhang family. When he was 11, Phentok was sent to Gampa Dzong to work, but he did not have enough food or clothes and was often beaten. After the democratic reform, his life completely changed. He had a house and now lives a happy, healthy life.

60 years ago, the word "home" was just a distant dream for Phentok.

"I was starving, I didn't have a complete piece of clothes to wear, and each day I could only eat one spoonful of tsampa. In the summer, I could pick potherbs, but in the winter, the lice on my body became food for my belly." Speaking of the past, Phentok's eyes were filled with tears.

According to Phentok's memory, he had never had a full meal, never worn decent clothes, and never slept a full night's sleep. At a young age he was burdened with heavy labor and suffered inhumane exploitation and oppression from the serf owners.

"Every day I had to get up when it was still dark to feed the horses and carry water. Once when I was carrying water, the rope on the bucket was not secure, and it slipped from my head and tightened around my neck. I couldn't breathe and almost strangled to death." This terrible incident cast a shadow on little Phentok. The pain on his body was far less than the pain in his heart.

Phentok said that when he was young, his family was crammed into a small shed like a pigsty. Although it was old and worn, he had his parents there. But after being sent to Gampa Dzong, he didn't have a home anymore, and he wandered around. At that time, he wanted to be with his parents, and he really wanted a home of his own…

In 1959, Tibet carried out democratic reform and abolished the dark feudal system of serfdom, liberating more than one million of serfs and slaves. A turning point had been ushered into Phentok's life.

"Our family received 19 mu (1 mu = 0.165 acres) of land, 60 sheep, six yaks, and two homes," Phentok said happily. "We had nothing in old Tibet, and we were overwhelmed by the high and many taxes. Now, we had land, houses, and cattle, and we could see the dawn of our life. I had hope in my heart."

In 1963, Phentok married a girl in his village, and they built three adobe houses. Since then, Phentok has truly owned his own home.

"I was so happy. My dreams had all become reality one by one, but that was just the beginning. Later, the days got more and more prosperous." Phentok's words are full of happiness.

In the early 1990s, Phentok built a small two-story building with four rooms. In 2008, thanks to the government's housing project, Phentok's family spent 100,000 yuan (14,870 US dollars) to rebuild a new house on the old site. The new building is more than 200 square meters big. In 2015, Phentok rebuilt this house and expanded the yard. There are now seven rooms in the two-story house, and it has an area of over 360 square meters. In the yard are three tractors, a pedicab, and a motorcycle.

In the 60 years since democratic reform, Phentok has gotten his own home, and his life has gotten better and better. Today he lives together with his children and grandchildren. "Home" is no longer just a place in which he once hoped to shelter from the wind and rain. Now it has a deeper meaning.