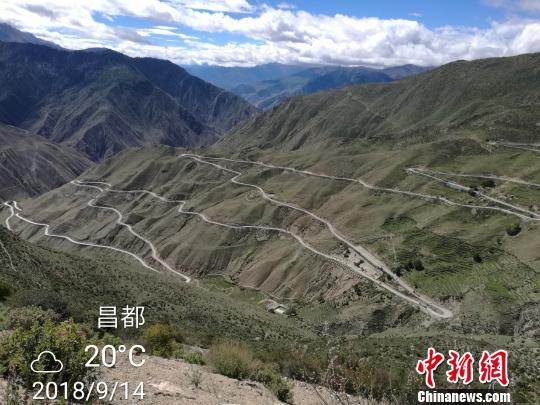 Photos taken by Yin Qiaoming along his journey.

In his 60s, he himself drives a car crossing Highway 318 into Tibet.

He is Yin Qiaoming from Liuzhou City, Guangxi Zhuang Autonomous Region in south China, who retired last year after working 24 years as a driver. When he told his children this plan to drive to Tibet, his daughter said, “Just go. Don’t have any regret.” His son suggested that he report his whereabouts at any time.”

Yin Qiaoming maintained his car well, checked over the directions, prepared food, medicine, and oxygen tank, and with encouragement and support from his family, on September 9, he set out from his hometown in Rong’an County.

Driving out from Guangxi, the route took him through Guizhou and into Sichuan on the 318 Sichuan-Tibet Highway. The scenery along this route was beautiful and exciting for Yin Qiaoming, from the Luding Bridge over the Dadu River, Paoma Mountain in Kangding, yaks crossing the grasslands, snow-capped mountain peaks, and untouched forests in Bomi, Tibet.

“So beautiful!” “So pretty!” When he saw beautiful scenery passing through the scenic areas, Yin Qiaoming would stop his car and walk around, taking videos and photos to share with his families and friends.

But along with the beauty came altitude sickness, unpredictable weather and obstacles on the road. “After I crossed Luding Bridge and reached an altitude of more than 3,300 meters, I got altitude sickness,” Yin Qiaoming remembered. “I felt dizzy and light-headed and my body ached.” After breathing from the oxygen tank and visiting a doctor, he gradually recovered.

After overcoming this bout of altitude sickness, Yin Qiaoming didn’t feel unwell any more. While on the road in Lithang County in Garze Tibetan Autonomous Prefecture in Sichuan, as he was concentrating on driving, suddenly he heard the sound of pitter-pattering on the roof of his car, and then a bang, which made him panicked. He stepped on the accelerator and sped up.

“It was a rockslide. Fortunately there were no big rocks,” Yin Qiaoming says as he talks about the dangers. On the Nyingchi section entering Bomi, Tibet, there were rocks along the road that look like it would scratch against the top of the car, and Yin Qiaoming unconsciously ducked his head as he passed by.

After arriving at Mila Mountain, it started to snow, and the whole world became white. “The snow blocked traffic, and a lot of cars stopped. I was really excited; as a southerner, I had never seen such snow!” 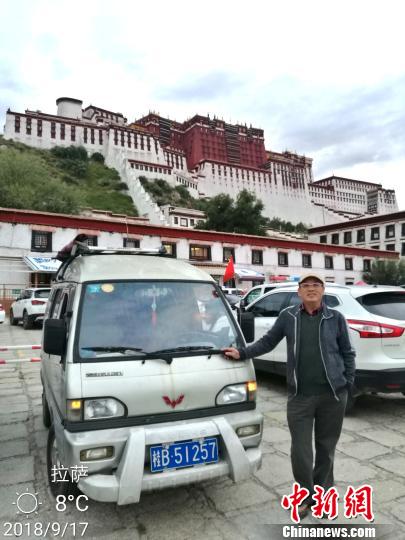 Despite these difficulties, the strangers he met along the way gave him great encouragement. “When the owner of a fast food restaurant found out that I was driving into Tibet, he didn’t accept my money to pay for my food,” Yin Qiaoming said with a smile. A couple from Liuzhou took his photo and put it on social media, and it earned a lot of likes. “I never felt lonely. When I was tired, I stopped and rested. When I woke up, I started driving again. It was very exciting.”

On the eighth day of his trip, on September 16, Yin Qiaoming finally arrived at his destination: Lhasa. The next day, he drove to the Potala Palace. “I was so excited, I asked someone to take a picture for me, my car, and the Potala Palace as a keepsake.”

Yin Qiaoming revealed that he originally planned to ride a motorcycle into Tibet and had even bought one. But after considering his family’s worries and his safety, in the end he decided to drive the Wuling minibus that has been with him for more than 10 years.

After spending two days in Lhasa, Yin Qiaoming began his return journey. “I chose not to go back the same way, but to cross Hoh Xil and go home on the Qinghai-Tibet Highway. This was a whole other kind of scenery.” Yin Qiaoming said that he posted his photos and videos on a short video platform, which received more than 7,000 likes and 800 fans.

Someone online commented, “Too dangerous. I want to go on the Sichuan-Tibet Highway, but I don’t dare.” Yin Qiaoming replied, “Don’t be afraid. You just need to be brave.”

One man, one car, 16 days and 7,086 kilometers. On September 24, the Mid-Autumn Festival, Yin Qiaoming arrived home safely. “I wanted to see the great rivers and mountains of China. At 60 years old, I’m physically strong. If I don’t get out, then I’m really old!” Yin Qiaoming has already started planning his next journey. “Next year, I plan to take my wife and drive to Xinjiang.”