It was till a car accident on the early morning of September 25th, 2017 that people began to know how much Professor Zhong Yang has already achieved in his life.

For 16 years, the professor has persevered his academic research in Tibet, scaling mountain peaks to collect plants seeds and looking for the evolutionary paths of organisms. His footsteps have covered the plateaus of northern Tibet, the mountains of the Himalayas, the no-man’s-zone in Ngari, and the churning waters of Yarlung Tsangpo River. He has collected more than 40 million seeds from around one thousand plants, filling in the blanks for Tibetan seeds in the world data bank.

The difficulty of collecting plant seeds at Tibet, “roof of the world,” was hard to describe for people who have not personally experienced it. Every plant needs 5000 seeds collected, and near-extinct plants need 500 seeds each. To protect the independence of the plants’ hereditary information, each sample had to be collected from at least 50 km apart, which meant that, on these expansive plateaus, one needed to travel as many as 800 km a day. One would leave at five or six am in the morning, arrive at camp at eight or nine pm, and then spend hours cataloging the plant samples, sleeping three hours a night was typical. 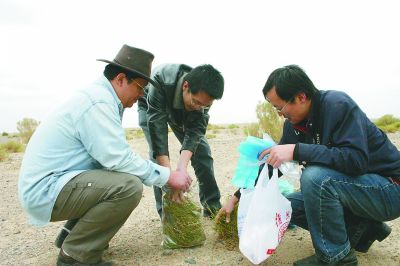 During these years, Professor Zhong’s footsteps have traveled to the most remote, harsh, and wild regions of Tibet. Giant boulders have fallen on cars he was riding in; he once even had gotten lost in the wilderness without food; sometimes there was no water, so he couldn’t wash; sometimes there was no lodging, so he slept in his coat in the car; sudden rain or ice storms meant he had to hide in mountain caves; sometimes he stayed in tents made of yak skin; oil lamps wouldn’t work at such high altitude regions, they’d stay bright for just a minute even with alcohol added; in winter, it was so freezing that they slept even with three comforters.

Professor Zhong was also an educator in addition to his research work. He created a research team for the Qinghai-Tibet Plateau. As Tibet University is poor in botany and can not apply for research funding, Zhong personally wrote reports for the university’s research team to help start their work.

In his 17-year career at Fudan University, the professor has educated 107 graduate and postdoctoral students. Field work in botany is incredibly dangerous, whenever there was any danger, he was always in front, protecting his students. When his gout acted up, one of his legs hurt so much that he almost couldn’t walk, but he still insisted on taking his students to collect samples. He was good at discovering students’ passion, always looking for ways to inspire them. He was a humorous teacher and beloved by young people. He often made time for public education seminars, and he always made his lab open for middle and elementary school students.

There are many more stories one could tell about Professor Zhong. He said that in one’s life, it wasn’t about how many papers published or how many awards won, it was about how many stories left behind. He also said that to live is to do meaningful and valuable things, and doing things for the world was the most meaningful.

As for the  meaning of life, Professor Zhong said, “every life ends one day, but I’m not afraid, because my students will continue on the road of scientific exploration, and the seeds we have collected may grow and flourish hundreds of years from now. By then, many people’s dreams might have come true.”