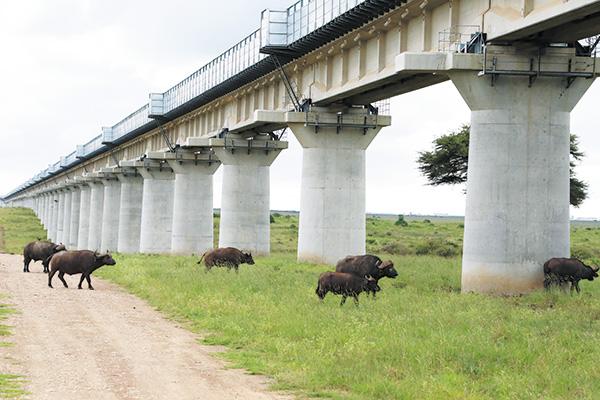 Buffaloes walk below the bridge where the Standard Gauge Railway passes through the Nairobi National Park.[Photo/Xinhua]

NAIROBI — Kenya's Standard Gauge Railway has put in place interventions to ensure that the railway is in harmony with the local environment.

Afristar, the operator of the Chinese-built SGR, has implemented a number of noise mitigation measures on the railroad aimed at decreasing interference in wildlife habitats.

Obed Kirwa, track technical supervisor at Afristar's Nairobi-Maai Mahiu Workshop, says they have installed sound barriers along the wildlife corridors to reduce disturbance to the animals.

"We have erected sound absorption plates on the track in the areas close to wildlife habitats," he adds.

The SGR has also built a great bridge at the height of 6.5 meters above the ground, where the railway passes through the Nairobi National Park, for the convenience of large animals such as elephants and giraffes to pass through. In addition, there is a 5.9-km-long, 2-meter-high sound barrier on either side of the guardrail of the bridge to minimize the noise caused by trains.

Kirwa, who has been working on the railway since 2017, says the sound barriers have significantly reduced the amount of noise emitted from the moving SGR locomotives."So, at this point, no animals have been affected by the noise. We have observed that when the passenger and cargo trains are passing along the park, the animals are walking freely, and some even relax below the bridge to shelter from the sun," he adds.

The SGR, inaugurated in 2017, runs from the coastal port of Mombasa through Nairobi and terminates at Suswa. It is the largest infrastructure construction project in Kenya since independence and a model project for China-Africa cooperation.

Zhang Zhengyi, deputy director of Afristar Nairobi at the Track and Signal Maintenance Workshop, says that at least 14 large wildlife passages, 79 bridges and 100 culverts have been set up along the railway route to ensure the free passage of animals.

"In the design of the railway, we have adopted a series of measures for animal protection, drawing on the design experience of the A50 road in the Netherlands, the B38 road in Germany and the Qinghai-Tibet Railway in China," Zhang says.

To accommodate the living habits of Kenya's iconic wildlife species, such as elephants and giraffes, the Mombasa-Nairobi Railway has set up several animal passages along the length of the railroad and increased the height of the bridges to facilitate the passage of animals.

Zhang notes that the identification of the locations of wildlife passages took into account the species' migration paths, as well as the distribution of the surrounding rivers and ditches.

He reveals that as part of efforts to boost animal welfare, the location and number of animal passageways set on the SGR were finally determined after several demonstrations and analyses with the Kenya Wildlife Service.

Nancy Githaiga, country director of the Africa Wildlife Foundation, a leading international conservation organization, says measures have been implemented to make a difference in the balance between the SGR and wildlife.