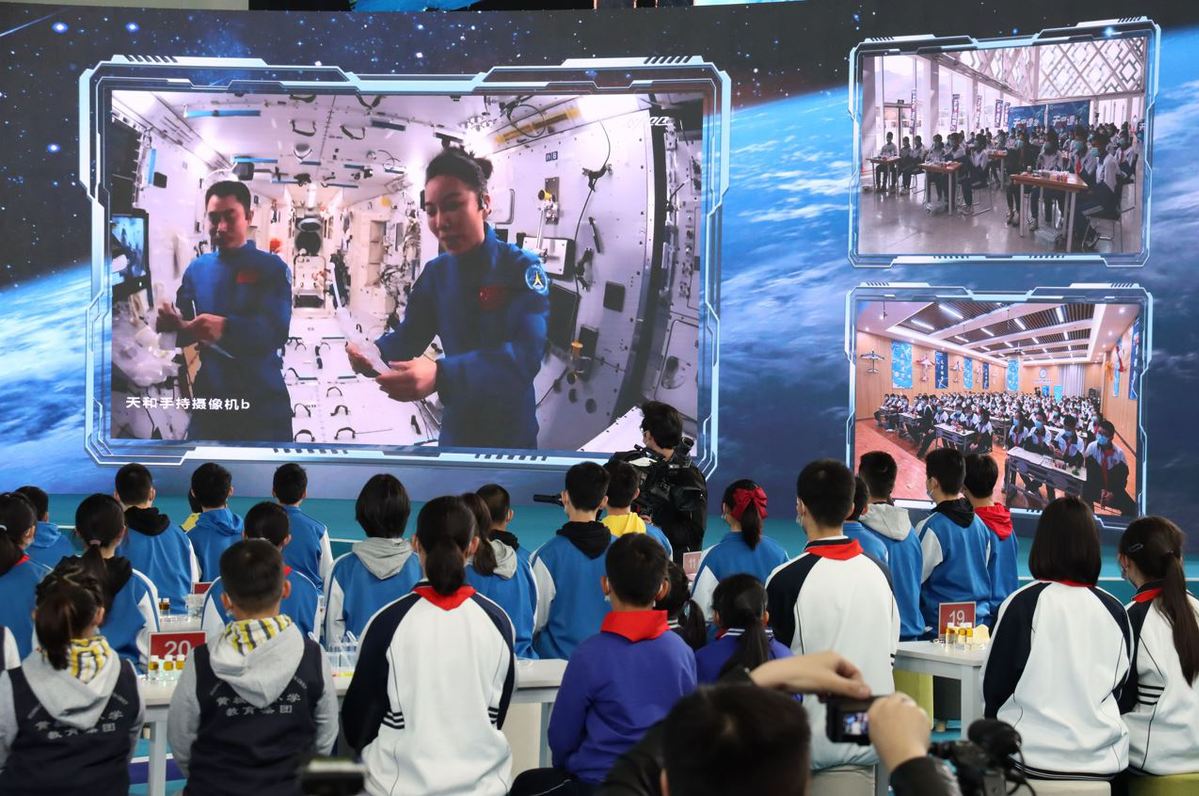 Students attend a science lecture conducted by Chinese astronauts from China's space station at the China Science and Technology Museum in Beijing on March 23, 2022. [Photo by Hu Lanyue/for chinadaily.com.cn]

Students enjoyed the latest science lecture given by astronauts on board China's Tiangong space station on Wednesday, watching them display unique physical phenomena in the orbiting spacecraft.

Major General Zhai Zhigang, Senior Colonel Wang Yaping and Senior Colonel Ye Guangfu, all members of the Shenzhou XIII mission crew, appeared on television screens watched by millions of students across China at 4 pm, saying they were happy to share scientific facts about spaceflight with students.

During the 41-minute lesson, which was livestreamed worldwide by China Media Group, the astronauts carried out four experiments to show physical phenomena only possible in microgravity, including liquid crystallization and a water bridge.

In one experiment, Wang used a toy of Bing Dwen Dwen, the popular mascot of the 2022 Beijing Winter Olympic Games, to display how objects fly in a weightless environment.

Before closing the lecture, the astronauts answered questions solicited from members of the public and raised by students at the ground venues. The questions covered various facets of life and work in space, such as how to take care of your skin, whether hot water was available, and how tears move in a microgravitational environment.

Wednesday's event marked the third time Wang has engaged in a space lecture. During the Shenzhou X mission in June 2013, she carried out the nation's first space-based lecture inside an experimental space station module to more than 60 million Chinese students. It made China the second country, following the United States, to have delivered a lesson to schoolchildren from space.

In early December, Wang and her crewmates conducted the country's second space lesson from the Tiangong station. The astronauts showed viewers how they live and work inside the space station, which consists of a core module, a human-rating certified spacecraft and two robotic cargo spaceships.

Shi Yi, deputy head of teaching and a physics teacher at Beijing No 101 Middle School, said after today's educational activity that science lectures delivered by astronauts can motivate students to explore the miraculous world of science and technology.

She said that encouraged by China's spaceflight achievements, her school has built a space science laboratory and begun lessons about space exploration.

"We encourage our students to imagine what a lunar outpost will look like and then design their own version," Shi said. "The teachers also discuss with their students about how to launch a Martian probe and how to make a spacesuit."

Zhang Wei, a senior scientist at the Chinese Academy of Sciences' Technology and Engineering Center for Space Utilization, said that in the near future, more scientific devices will be placed in the Tiangong station and appear in science activities for the public.

The Shenzhou XIII mission was launched on Oct 16 by a Long March 2F carrier rocket that blasted off from the Jiuquan Satellite Launch Center in northwestern China's Gobi Desert, with the crew soon entering the Tiangong station.

They have spent more than five months working in the station, and are scheduled to fly back to Earth in the middle of next month at the end of China's longest manned space mission.