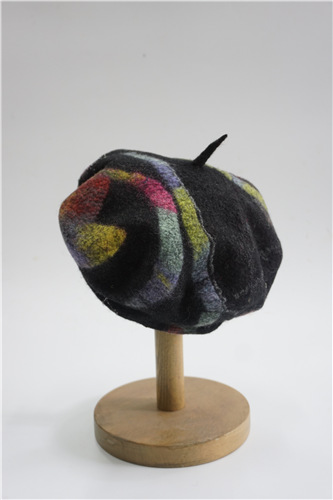 A felted hat and a small-sized tapestry featuring a piece of ceramic and a wine cap on display at artist Ni Lingling's current exhibition in Beijing. [Photo provided to China Daily]

On one level, of course, she felt, in so many ways, that it was the right thing to do. This was a moment when an emotion and a material coincided. With a genuine love of felt, four years ago, jewelry designer Ni Lingling visited a village in Dali, Yunnan province, which is known for its traditional techniques in making the compact wool, to find a teacher.

However, she found that only a few locals still used the traditional craft, which had been passed down from their ancestors. Ni decided there and then to take matters into her own hands.

Proof of her dedication and skill are on display at an ongoing show at Daqian Contemporary Art Center in Beijing. It features more than 70 felt creations that she has made in the past three years, including scarves, hats, tapestries, jewelry and other accessories.

The exhibits are all made using traditional techniques, such as rolling, pressing or twisting the wool with other suitable textile material through the application of moisture or heat, causing the different fibers to mat together to create a smooth surface or achieve artistic patterns.

"The wool used in felt is very warm, reminding me of my childhood living with my grandma. I also enjoy the hands-on process of felting," says the 32-year-old who works for a felt studio with Shanghai Art and Design Academy. 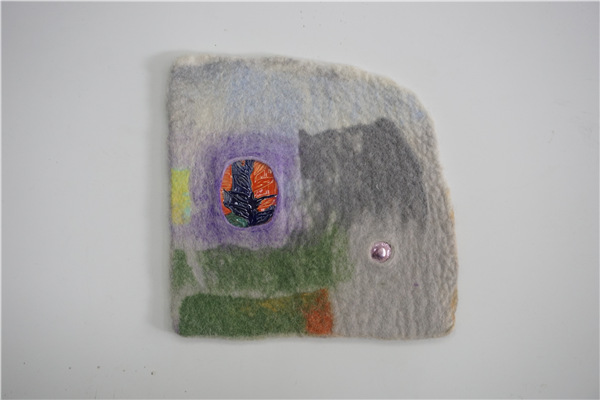 A felted hat and a small-sized tapestry featuring a piece of ceramic and a wine cap on display at artist Ni Lingling's current exhibition in Beijing. [Photo provided to China Daily]

Ni's passion for felt comes from her childhood living in a village in Anhui province with her grandparents. She learned jewelry design and obtained her bachelor's degree at the Shanghai Art and Design Academy. But working on cold, sharp, pointed gems did not fulfill Ni's desire to shape warm things by hand. She wanted to feel the satisfaction of making something from start to finish.

For around four years following her graduation, Ni taught herself felt techniques. To learn more about the history and technique of felt, Ni visited a village in Dali, Yunnan province, in 2016, where she became an apprentice to an old craftsman whose family has used traditional techniques to produce the fabric for generations.

"Their techniques are very simple and traditional, only involving power of one's limbs, not machines. The craft filled me with awe," says Ni, who stayed at the village for a month, making felt products by hand every day.

She was told that all the villagers used to be felters, but only two families were still making felt products when she visited the village earlier this year.

"I want to revive the craft, which dates back hundreds of years, in China," says Ni, adding that many craftsmen quit the job because their felt products were seen as outdated.

Last year, Ni won a prize to visit Paris and enjoy a three-month stay there to learn and communicate with young artists from across the world. The prize was co-funded by Prix YISHU 8, a nonprofit art organization, and the Golden Phoenix Art Fund. It was established last year to support young craftsmen like Ni to take part in exchange projects in other countries.

Ni Min, who works with Prix YISHU 8, says they awarded Ni Lingling because the judging panel was moved by her genuine passion and love for the craft.

"It's rare for a young person to take it upon themselves to visit different villages just to better learn and understand an old craft," he says.

Lei Geye, co-founder of Golden Phoenix Art Fund, says Ni Lingling's works are creative and warm. She adds that the young felter is good at making fashionable and beautiful things that can be used in daily life. 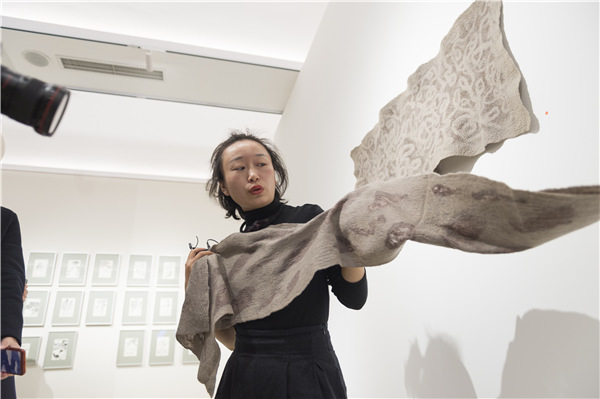 Felt artist Ni Lingling introduces one of the pieces on show at an ongoing exhibition in Beijing that runs until Dec 12. [Photo provided to China Daily]

Some of Ni Lingling's art pieces that were on display in Beijing were done at the beginning of the year in Paris.

Ni Lingling says that meeting with musicians, dancers and artists from across the world has opened here eyes to a new world with regards to her in use of materials for felt making. For instance, she mixes leaves, twigs, wine caps and pieces of ceramic into her felt creations-things she gathered while going about her daily life, such as visiting a market or going to a friend's party.

And the colors of pieces created in Paris are more vivid and bright compared with her previous work, which usually just featured the wool's original hue.

She regards the making of her felt art as a way of taking notes and recording her daily ideas or emotions.

"It's my own way of writing a diary. These felt works record my feelings at that moment," Ni Lingling says.

Right after her show opened on Nov 25, she returned to her day job in Shanghai.

She says she will try more materials and approaches in felt making as well as helping to train craftsmen in Yunnan and Qinghai provinces, where some villages still favor such felting skills.